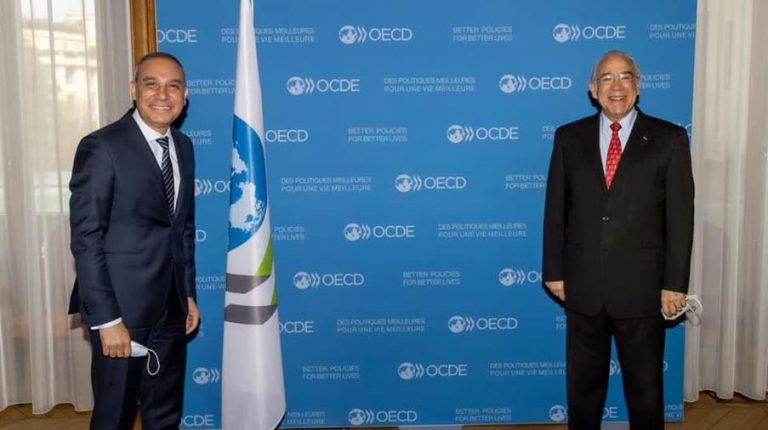 Egypt’s Ambassador to France Alaa Youssef has met with Angel Gurria, Secretary-General of the Organisation for Economic Cooperation and Development (OECD), to discuss ways to strengthen the organisation’s role in supporting Egypt’s development efforts.

The two sides also discussed leveraging the organisation’s expertise and reports in many areas, particularly the development of public administration, as the transition to the New Administrative Capital (NAC) approaches

The meeting additionally touched on the OECD’s country programme for Egypt, which is being developed between the two sides.

Ambassador Youssef emphasised that Egypt attaches great importance to this programme, as it contributes to implementing economic reforms and realising Egypt’s Vision 2030 for sustainable development.

Gurria expressed his organisation’s commitment to speeding up all procedures for the programme, so that it can be launched during the first half (H1) of 2021.

During the meeting, a number of programmes and activities between Egypt and the organisation were reviewed. The most notable of these was the Programme for Sustainable Infrastructure Investment, particularly in the recovery phase following the novel coronavirus (COVID-19) pandemic.

Youssef presented the potential for cooperation in the field of youth empowerment, as one of the areas that is consistent with Egyptian development priorities that the country attaches great importance to.

In this regard, he referred to the presidential programme for the rehabilitation of young people for leadership. This aims to create a youth base of competencies capable of taking on political, community and administrative responsibility in the country.

Gurria praised the programme, noting that the organisation is already interested in such constructive initiatives, and that it would address the mechanisms of cooperation with Egypt in this regard.

He also praised Egypt’s leading role in the organisation’s Middle East and North Africa initiative since its founding.

Gurria praised the participation of Egypt’s Minister of Planning and Economic Development Hala El-Said at the initiative’s ministerial meeting, as well as his role as co-chair of the Middle East and North Africa Women’s Economic Empowerment Forum.

Opinion| Look ahead, but do not forget to look back