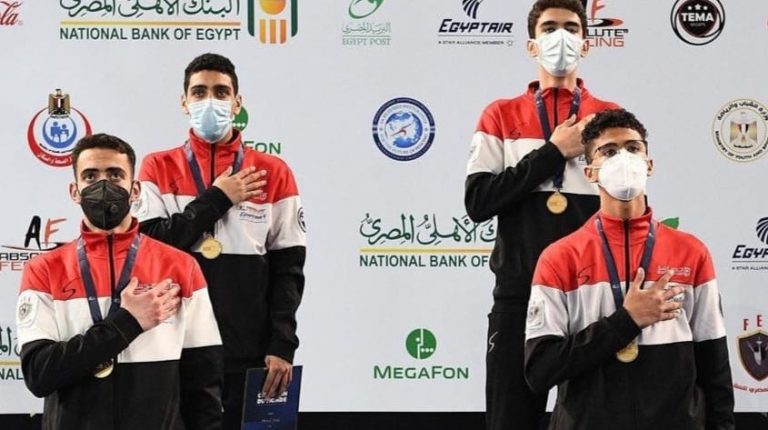 Egypt’s fencing youth team has achieved a historic achievement after being crowned champions in the team competition in the World Youth Championship, which Egypt is hosting from 3 to 11 April 2021.

The medal is Egypt’s first in the team competitions, and the first gold for Egypt at the World Youth Championships.

The youth team, which is currently ranked No 5 in the world, defeated World No 3 Russia in the final, with a score of 45-38, to win the gold medal, leaving their rivals with silver, and France with bronze.

The Egyptian national team qualified for the final after beating World No 1 and World Champions, the US, in a historic achievement in the semi-finals with a score of 45-31.

On Sunday evening, the events of the individual fencing competitions ended, where the US’ Magda Skarbonkiewicz won gold, Russia’s Yulia Salabai won silver, and Azerbaijan’s Zarifa Huseynova and the US’ Zoe Kim won bronze.

In the Individual Sabre competitions, Romania’s Marco Sovar won the gold medal, while South Korea’s Park Jun-seong won the silver medal. The bronze was awarded to Russia’s Arseniy Shelekhov and the US’ Colby Harley.

It is noteworthy that the World Fencing Junior and Cadet Championship is featuring 1,079 players and 500 coaches and administrators from around the world. All precautionary measures are being applied to protect all participants and preserve their health due to the challenges of the novel coronavirus (COVID-19) pandemic.

The Egyptian Olympic Committee, headed by Hisham Hatab, has congratulated the Board of Directors of the Fencing Federation headed by Abdel Moneim Al-Husseiny, for winning the gold medal at the World Youth Championships currently being held in Egypt.

Hatab emphasised that the team’s achievements are significant and can be counted for the Egyptian sport, which is making great achievements in the current period.

These achievements come as a result of the Egyptian state’s support for sports and athletes, which has gone towards supporting the achievement of championships and achievements in all sports.

The Egyptian youth team qualified for the final of the tournament after beating the US in the semi-final with a score of 45-31.

As for the young women’s team, it achieved the world ranking of No 12 after losing to Spain by 45-25.

The sport of fencing has become a well-known sport in Egypt in recent times, especially after the champion Alaa Abu Al-Qasim won silver at the 2012 London Olympics. Its popularity was further increased by Mohamed Hamza, topped the global standings of the game at the youth level and was honoured by the International Fencing Federation.

Fencing is part of a group of three related combat sports, with the three disciplines in the sport fencing being the foil, the épée, and the sabre. The last is the most used in competition, and descends from the common personal weapons of the 18th Century.

The fencing sword was invented in France in the mid-18th Century as a training weapon. For fast and excellent practice, fencers notched the tapered point at the tip of the sword by crowning the blade or locking the handle at the taper point, a practice taken up by German students in academic fencing.

There are two types of swords used today, namely the non-electric sword known as the Bukhari or dry sword, and the electric sword. The common components of all types are the grenade, the sword handle, the grip, the thumb pad, and the blade.

Fencing is governed by the right-to-attack rules, with most fencing matches consisting of two fencers competing for the right to initiate an attack. When one of the fencers attacks, the opponent tries to avoid the attack, and if his attempt is successful, a wrong stab is counted against his opponent. The duel may be individual or in a group competition with participation in a team consisting of four players.

Practitioners of this sport have many physical, mental and personal qualities, the most important of which are reaction speed, neuromuscular compatibility, agility, flexibility, honesty and intelligence, calm nerves, patience, stamina, accuracy and focus, perseverance and determination, willpower, accuracy and appropriate decision-making.