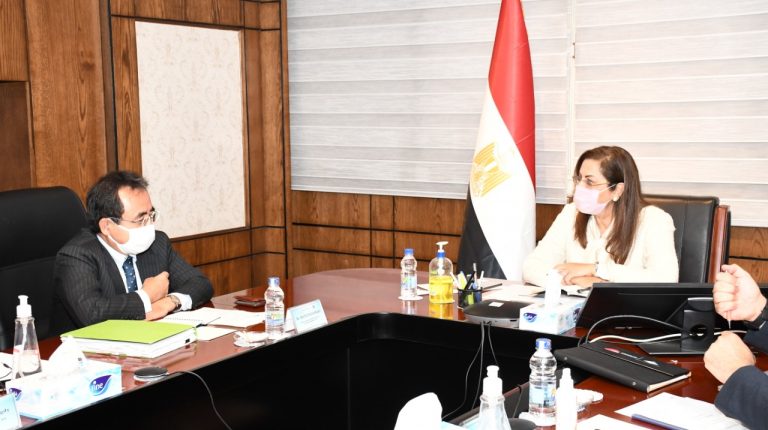 During the meeting, the sides discussed future aspects of cooperation between Egypt and the agency.

At the beginning of the meeting, El-Said welcomed Matsunaga and his delegation. She stressed her ministry’s keenness to cooperate with various development partners, especially international organisations and institutions, to achieve the UN’s sustainable development goals (SDGs).

El-Said reviewed the efforts made by the Ministry of Planning and Economic Development during the previous period.

The most prominent of these are: the file of structural reforms; improvement in measuring economic indicators; setting medium-term plans; rates of economic growth; the file of sustainable development; and the efforts of the Egyptian state in empowering women and promoting efficient leaders.

The minister highlighted the efforts to pay attention to irregular employment, especially given the repercussions of the novel coronavirus (COVID-19) crisis and the wage file.

It also takes into account the “Rowad 2030 project”, which is concerned with business incubators and the dissemination of the culture of entrepreneurship. This is in addition to the national project for the development of the Egyptian countryside through the “Decent Life” initiative.

El-Said referred to her ministry’s interest in expanding partnerships with Japanese entities, especially JICA because of its long history in the field of training.

For his part, Kamali stressed Japan’s aspiration to support Egypt’s efforts to join the country programme of the Organization for Economic Cooperation and Development (OECD). This comes especially as Japan is one of the important countries in the organisation, and Egypt is keen to benefit from its experience.

Kamali also referred to the efforts made by the Ministry of Planning and Economic Development with the International Monetary Fund (IMF). The most important sectors that the ministry is currently interested in concerns the file of structural reforms.

He pointed to the ministry’s interest in the industrial sector, and the need to increase the rate of GDP, whilst also paying attention to providing decent jobs.

Kamali stressed that Egypt is one of the few countries in the world that has not been greatly affected by the Coronavirus crisis in terms of job creation.

During the meeting, Sherif gave a presentation on the nature of the NIGSD’s work and its current efforts in preparing national indicators for Egypt concerning governance and sustainable development.

She referred to the institute’s cooperation with many international bodies, such as the University of Missouri as well as the GRIPS Institute.

Matsunaga expressed his happiness to meet with El-Said during his four-day-long trip to Egypt, and lauded the Ministry of Planning and Economic Development’s efforts during the previous period.

Following a visit to the New Administrative Capital (NAC), he also praised the tremendous ongoing developments in Egypt. During his visit to the major national project, Matsunaga was able to see it on the ground.

He said that the project confirmed that Egypt had moved to an important stage in its developmental future. He also emphasised that the Egyptian experience would be inspiring and pioneering.

Matsunaga welcomed all the proposals submitted by Egypt’s Ministry of Planning and Economic Development, especially in the field of training as well as entrepreneurship projects.

He indicated that these proposals will be a new beginning for fruitful and continuous cooperation with the Ministry of Planning and Economic Development. This comes in light of the prosperity of Egyptian-Japanese relations, and affirmed the desire of the political leadership in Japan in activating cooperation and supporting development efforts with Egypt.