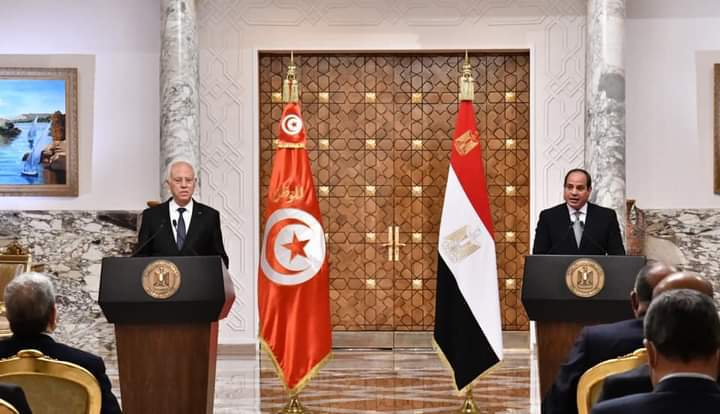 Egypt’s President Abdel Fattah Al-Sisi has met with his Tunisian counterpart Qais Said to discuss a number of regional and international issues of common interest.

Speaking at a press conference on Saturday, Al-Sisi said that the most important topics of discussion were Libya, Palestine, as well as African affairs.

The Egyptian President added that the views of the two countries converge on various issues, and that there is more to strengthen the cooperation with special interest.

Al-Sisi also confirmed Egypt’s readiness to develop this cooperation in a way that achieves the development goals of the two countries at the commercial and investment level.

He said that the discussions with his Tunisian counterpart highlighted the need to strengthen anti-terrorism efforts, and that work must be done to suppress sources of financing for terrorist groups.

The two heads of state emphasised the importance of continuing Arab efforts to support the Palestinian cause as a central issue to the Arab world. This includes the need to exert efforts to implement the principle of the two-state solution according to the June 1967 borders, with East Jerusalem as its capital.

Moreover, Al-Sisi said that the issue of Egyptian water security was discussed as being part of the Arab national security. This included emphasis on preserving water rights for Egypt as a fateful issue.

The Tunisian president noted that he values Egypt’s efforts to reach a fair and comprehensive agreement on the rules for operating the controversial River Nile Dam.

Said said that the bilateral discussions included prospects for joint action regarding the African arena and support for cooperation across the continent, in light of Egypt and Tunisia’s role in this regard.

He also said that a number of issues raised by the Egyptian President related to bilateral relations between the two countries.

“We talked about many stations and many risks that must be addressed because these dangers, as everyone knows, target countries and societies,” he said, “There must be clear awareness that these risks are great, and that the efforts that must be made in order to preserve state institutions and international facilities and the cohesion of societies are great.”

The meeting witnessed discussions on the latest developments in the Libyan issue, with the two presidents agreeing on the need to intensify joint coordination in this regard.

This is particularly relevant given that Egypt and Tunisia represent two direct neighbouring countries that share extended borders with Libya, which can lead to direct repercussions on their national security should the Libyan crisis continue.

In this regard, both presidents welcomed the formation of the new Libyan executive authority, and stressed the two brotherly countries’ keenness to continue supporting the Libyan people. This would work towards completing the mechanisms of managing their country, and install the foundations of peace and stability.

Al-Sisi welcomed Said for his first visit to Egypt, with the Tunisian president inviting Al-Sisi to visit his country.

The Egyptian President concluded the press conference saying to Said, “I am pleased to meet you today, and appreciate the role that Tunisia plays as an Arab member in the Security Council, and the efforts it exerts to support Arab causes.”

“I look forward to more close cooperation to cooperate for the common interest,” Al-Sisi said, “I wish Tunisia and its brotherly people all good, stability and prosperity, and I renew welcome to your second country, Egypt.”

Said thanked Al-Sisi for the many topics that were addressed in Cairo, as well as the hospitality and generosity provided his delegation in Egypt.