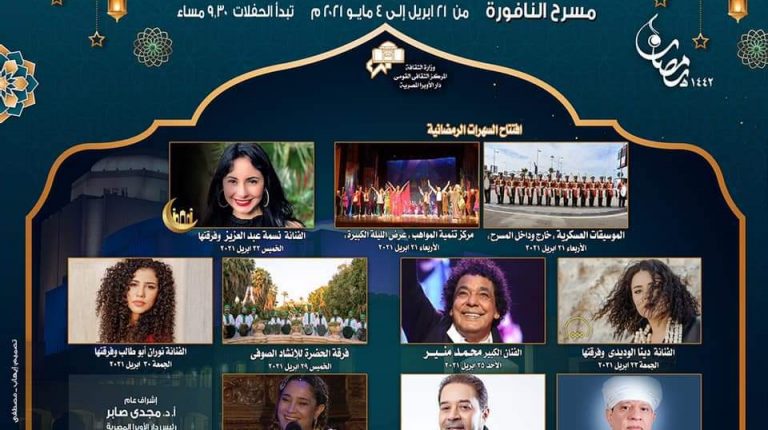 The Cairo Opera House will hold a series of 27 artistic performances during the holy month of Ramadan, according to its Chairperson Magdy Saber.

Saber said that all the shows will start at 21:30, and will include distinguished musical and singing evenings with a spiritual and religious character.

The concerts aim to elevate feelings of happiness and spirituality during the holy month, whilst highlighting the talents of unique young artistic groups.

He added that the celebration will also include singing events by Egyptian and Arab stars, in addition to continuing the activities of the opera season programme.

Earlier, Minister of Culture Inas Abdel Dayem approved the Cairo Opera House’s artistic and cultural programme for the month of Ramadan. The celebration will be held in the Opera Houses of Cairo, Alexandria, and Damanhour.

Saber indicated that the Ramadan Nights programme includes 10 concerts at the Cairo Opera House’s Fountain Theater, which will, for the first time, see opera evenings during the holy month.

Other events that are set to take place include a concert by the Tunisian singer Ghalia Ben Ali and the Hadara troupe for Sufi chanting, who will also perform two shows at the Sayed Darwish Theater in Alexandria.

Meanwhile, the Cairo Opera House’s small theatre will also host three Islamic evenings that will include music from the Philippines, Indonesia, and Palestine. These concerts will feature the musical and lyrical heritages of all three countries, along with examples of their customs and traditions.

The Cairo Opera House’s artistic season programme will take place at its various theatres with 12 different concerts by the Abdel Halim Nouira band for Arab music, as well as three concerts by the Talent Development Center.

This is in addition to performances by the Sayed Darwish Heritage Ensemble, and the Easter Concert for the Umm Al-Nur choir. Additionally, there will be two concerts by the religious singing troupe, the Conservatoire Orchestra, two events by the Opera Cinema Club, as well as an episode of the Wahhabis series.