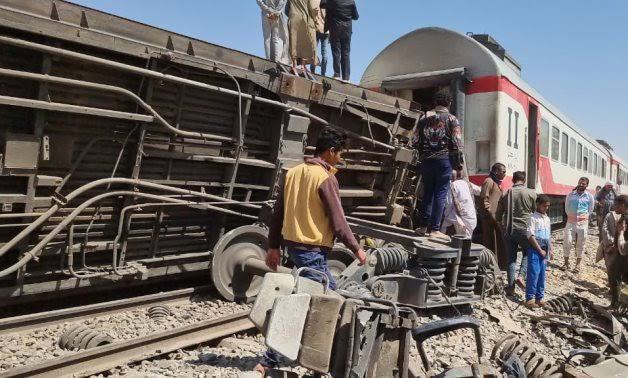 Egypt’s Public Prosecution announced, on Sunday, the results of the investigations into the train collision that occurred in Sohag on 26 March, and left 20 people dead and 199 injured.

The investigations revealed that the Sohag-Alexandria Train No. 157 had stopped twice between Maragha and Tahta stations, until the arrival of the Aswan-Cairo Train No. 2011 that crashed into it.

During the investigations, the Train No. 157 driver and his assistant had claimed that the train’s control screen had warned them against decreasing the pressure in the pipes connecting the train cars, which had stopped the train automatically.

They explained that only by activating the emergency brakes or closing the brake pneumatic diverter valves would cause the decrease in the pressure in the pipes connecting between the train cars.

The assistant driver added that the train stopped for the second time because of the closure of one of the brake pneumatic diverter valves by an unknown person.

However, the passengers and security personnel said they did not see anyone trying to pull the emergency brakes, and they also did not hear the distinctive sound of their being pulling.

The train conductor has also said that he ensured that the brakes were not pulled in four cars.

Meanwhile, the assistant driver of the Train No. 2011 asserted that he checked that all the semaphore lights were green along the railway road before the crash site.

When he was about 500 metres away, he noticed that the Train No. 157 had stopped, so he used the hand brakes to stop the train which failed to work.

However, the driver of the Train No. 2011 has claimed that he was the one who drove the train not his assistant. Both the driver and his assistant said they had stopped the automatic train control (ATC).

The ATC is a device that receives speed information from the track circuit on which the train is travelling, and automatically decelerates the train to the permissible speed if the train is speeding.

Moreover, the investigations confirmed that the head of the Central Control Department in Assiut had left his workplace at the time of the accident, despite his responsibility to monitor the movement of trains at the collision site.

The Public Prosecution has also found that not all the semaphore lights were green, but one of the lights about 1 km away from the crash site was yellow. This means that the train should slow down. Meanwhile, the second light which was located about 310 metres away from the collision site was red.

The Public Prosecution had conducted 13 simulations using all types of hand brakes with a tractor similar to the one used in the Train No. 2011. It found that if the train was travelling at a speed of 90 km/h as both the driver and his assistant claimed, the train should have been able to stop before the point of collision.

The drug abuse tests had also indicated that the supervisor of the observation tower at Maragha Station was abusing narcotic hashish, whilst the assistant driver of the Train No. 157 was found to be abusing the tramadol drug.