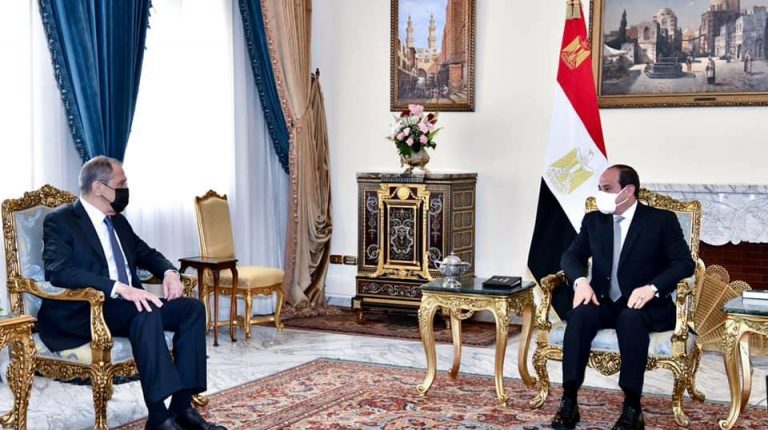 Al-Sisi renewed Egypt’s keenness to reach a legally binding agreement on the filling and operation of the Ethiopian dam.

Both officials discussed the bilateral military and security cooperation, including joint efforts to combat terrorism.

Additionally, Al-Sisi and Lavrov talked about the possible resumption of Russian flights to Egypt, the Dabaa nuclear plant project, and the ongoing preparations for the next session of the Joint Economic Committee.

During the meeting, President Al-Sisi stressed his keenness to strengthen the extended partnership with Russia, which contributed to the conclusion of the Comprehensive Strategic Partnership Agreement.

The agreement opens up new horizons for cooperation between the two countries in many fields, especially the Russian Industrial Zone in East Port Said and the Dabaa nuclear plant.

Moreover, the meeting addressed the latest developments of the most important regional issues, as the Egyptian president affirmed his country’s position on restoring security and stability, establishing elements of sustainability in the countries affected by conflicts, and rebuilding their national institutions.

Regarding the Libyan issue, Al-Sisi reviewed the Egyptian efforts to support the new temporary executive authority in Libya in various bilateral, regional, and international forums, and to advance all paths to settle the crisis militarily, politically, and economically.

He further stressed the need to end the presence of mercenaries in Libya and stop foreign interference which fuels the crisis.

For his part, Lavrov praised the vital Egyptian role in resolving the Libyan crisis, especially the Egyptian President’s personal efforts in this regard, which strengthened the political path to solving the issue. He also stressed Russia’s keenness to continue cooperation and intensive coordination with Egypt.