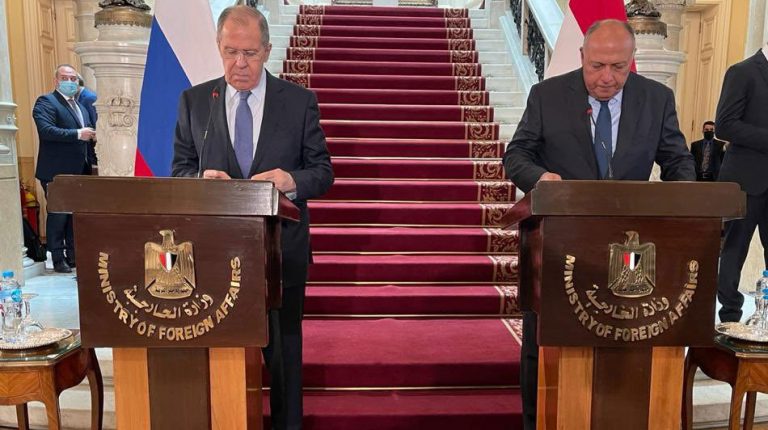 During the meeting, the two sides stressed the depth of relations between the two countries in various fields, in addition to the close coordination between Cairo and Moscow on many issues of common concern.

Speaking during a joint press conference with Lavrov in Cairo on Monday, Shoukry said that all aspects of cooperation were addressed, and there is satisfaction with the pace of collaboration.

This includes the Dabaa Nuclear Power Plant for the peaceful use of nuclear energy, the development of railways, or the Russian industrial zone in Egypt.

Shoukry thanked Russia for its support for Egypt’s accession to the Eurasian Union, and the joint work to advance cultural relations.

The minister also announced that the two countries are preparing to launch the Egyptian-Russian Cultural Year next May, to strengthen cultural relations.

Shoukry indicated that the talks also discussed regional issues, foremost among which is the Palestinian issue and the importance of advancing peace and establishing a Palestinian state on the borders of 1967, with East Jerusalem as its capital.

He said that he briefed his Russian counterpart on Egypt’s efforts in this regard, as well as the efforts undertaken by the Quartet of France, Germany, and Jordan, alongside Egypt, and the efforts for Palestinian reconciliation.

Shoukry added that it was agreed upon to continue all coordination efforts between the two countries at the ministerial and sub-ministerial level. The details on the 2 + 2 automatic meetings at the level of the two countries’ Foreign and Defence Ministers will soon be determined.

Shoukry said that it is necessary for Syria to return to the Arab League, adding that Egypt has empathised with the Syrian people’s suffering in recent years.

He pointed out that he hopes Syria will regain its stability, and for the Syrian people to enjoy the exercise of political life.

The Syrian people are the ones who will decide their future and formulate the government that will represent them in the upcoming elections, Shoukry emphasised

For his part, Lavrov said that upcoming projects in Egypt were discussed, including the nuclear project at Dabaa, and Egypt’s railway infrastructure.

He added that Russia is keen on cooperation and coordination with Egypt in various bilateral fields, and that many agreements have been talked about between the two countries in the field of education and joint cooperation.

Lavrov said that he discussed the Libyan file with Shoukry, and it was emphasised that the stability of the situation on the ground helps political stability.

Lavrov pointed out that the Russian position on Palestine has been constant for years, and called for the issue not to be marginalised as a result of normalisation with some Arab countries.

He emphasised the necessity of completing the international quartet to resume the Palestinian-Israeli negotiations on the basis of the Arab Peace Initiative.