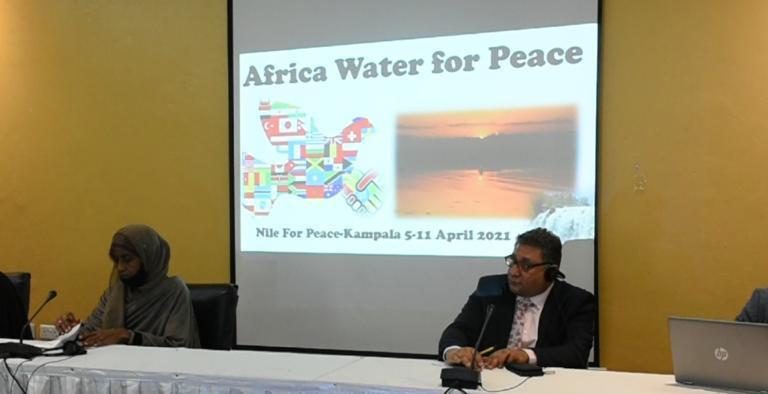 African civil society representatives participating in the recent Nile for Peace Conference, which took place on 5-11 April in the Ugandan capital, Kampala, have called for a postponement to the massive Ethiopian dam second filling.

Egypt was represented at the conference by the Maat Foundation for Peace, Development and Human Rights, at the invitation of the Kenyan African Platform Organization.

Maat’s participation came as part of its efforts to support and bring peace to Africa, and supports its belief in the role of civil society as a major partner in sustainable peace and development processes.

The conference was attended by representatives of civil society and stakeholders from nine African countries, namely: Ethiopia; Egypt; Sudan; Uganda; Kenya; Tanzania; the Democratic Republic of the Congo (DRC); Burundi; and Morocco.

Over the course of the conference, experts in water affairs, human rights, and sustainable development discussed the importance of the River Nile, and the agreements organising water management and distribution.
This took place with a focus on the Grand Ethiopian Renaissance Dam (GERD) crisis, in order to come up with alternative solutions that guarantee the equitable distribution of water.

The participants also discussed a number of proposals to develop a short-term quick action strategy to communicate with the three countries involved in the GERD dispute, namely Egypt, Sudan, and Ethiopia.

The participants agreed to hold local seminars within their countries to mobilise organisations to sign the closing document from various African countries. This would also include forming African public opinion in support of the principles of the document.

The participants suggested that a long-term strategic plan be drawn up to work to prevent any potential conflict in Africa over rivers. They also put forward the suggestion that the conference participants be the nucleus for establishing an entity that seeks to establish peace and prevent conflict.

At the end of the conference, all attendees signed a document which they agreed will serve as a “guiding principle”.

The document came out with a set of recommendations directed to the three countries involved in GERD negotiations, the Nile Basin countries, and the international community.

The most important of these are: to postpone the second filling of the Ethiopian dam; the Egyptian government’s request to participate in sustainable development work in Ethiopia; as well as the international community’s contribution to compensate Ethiopia for any damage resulting from the delay in filling the dam. This included asking the three countries to draw up a legal agreement that guarantees that none of the three peoples will be harmed.

Maat President Ayman Okeil said that the document is a strong foundation upon which African civil society can build, to call on governments for peaceful negotiation based on good intentions and not conflict.

Okeil stressed that the document establishes a fair solution that guarantees against all harm. He noted the need to expedite the conduct of advocacy and alignment among African civil society with all stakeholders to press for the implementation of the principles of the document.

This aims to solve disputes surrounding the controversial dam project, but also puts forward the requirements to prevent any potential conflict on rivers in Africa in the future.