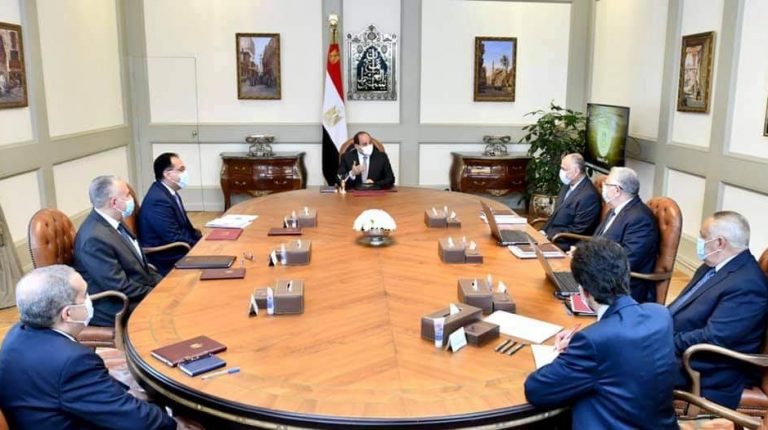 As part of the review, Al-Sisi met with: Prime Minister Mostafa Madbouly; Tarek Amer, Governor of the Central Bank of Egypt (CBE); Mohamed Abdel Atty, Minister of Water Resources and Irrigation; and Elsayed Elkosayer, Minister of Agriculture and Land Reclamation.

Presidency Spokesperson Bassam Rady said the President reviewed the efforts made by the government to establish the smart irrigation system.

It uses sophisticated sensor devices to provide highly accurate measurements of moisture levels in the soil, which helps to increase the crop productivity of agricultural lands. This system will help decrease the use of fertilisers and irrigation water, thus doubling the income of rural families.

Al-Sisi directed for the provisions of these devices at reasonable prices so that they are accessible for farmers. This will take place in coordination between the Arab Organization for Industrialization (AOI), and the Ministries of Water Resources and Irrigation, Agriculture and Land Reclamation, and Military Production.

Al-Sisi also directed for farmers to be trained in the operation and maintenance of the modern irrigation systems, through the extension programmes provided by agricultural societies.

He called for launching a media awareness campaign targeting farmers and their families, to educate them about the positive impact of using modern irrigation systems to raise productivity. This would also help create awareness on the systems’ ability to raise the efficiency of water usage and increase the value of the return from the water unit.

These new methods include drip irrigation, bubbler irrigation, and fog spraying, instead of the old wasteful flood irrigation system.