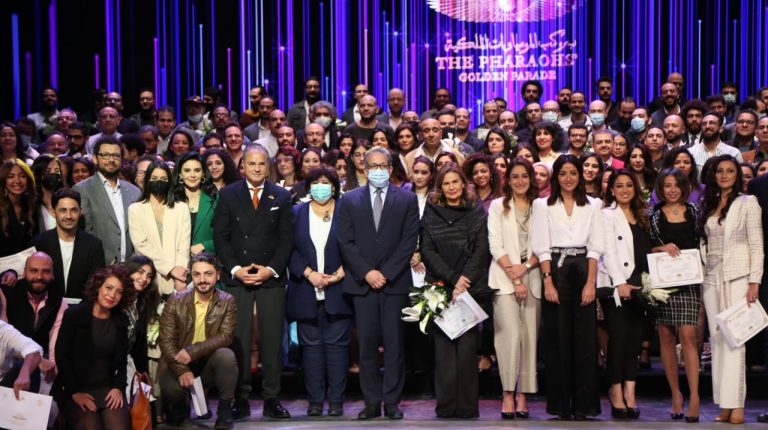 Egypt’s Minister of Culture Inas Abdel Dayem and Minister of Tourism and Antiquities Khaled El-Anani have honoured the Cairo Opera House performers who participated in the Royal Mummies Parade.

The celebration took place at the Grand Opera Theater, in the presence of President of the Egyptian Opera House Magdy Saber.

Abdel Dayem said that the artists who participated in the Pharaohs’ Golden Parade represented one of Egypt’s soft powers, and confirmed the leadership of the oldest civilisations on earth.

Whilst praising their performance, she added that they are an honourable image of contemporary creativity and a model for excellence and distinction. She noted that the performance came in a manner befitting Egypt’s position in front of the world.

Abdel Dayem also said that that culture and arts are the prelude and starting points of Egypt’s Sustainable Development plans.

For his part, El-Anani said that the Cairo Opera House is the best place to honour the stars of the Royal Mummies Parade.

He thanked the Minister of Culture for the ceremonial support and the participating artists for their dazzling performance, pointing out that they have the potential for notable media interest as a result.

In this unique cultural and educational presentation, the minister emphasised that their skills and performance are the best tourism promotion for Egypt.

El-Anani expressed his wish to organise a show throughout the year focusing on a procession of mummies at the opera. This aims to highlight the Egyptian national identity and invest it in external performances in various countries around the world.

The celebration included the presentation of a documentary film that included excerpts from the Royal Mummies Parade. Following this, both Abdel Dayem and El-Anani handed over certificates of appreciation and bouquets of flowers in honour of the artists.

The effort they exerted since the beginning of the presentation helped focus the attention of the world on Egypt, whilst making every Egyptian proud of their heritage and their country’s ancient civilisation.

The historic parade saw 22 mummies – 18 kings and 4 queens – transported from the Egyptian Museum in Cairo’s Tahrir Square to the National Museum of Egyptian Civilization 5km away.