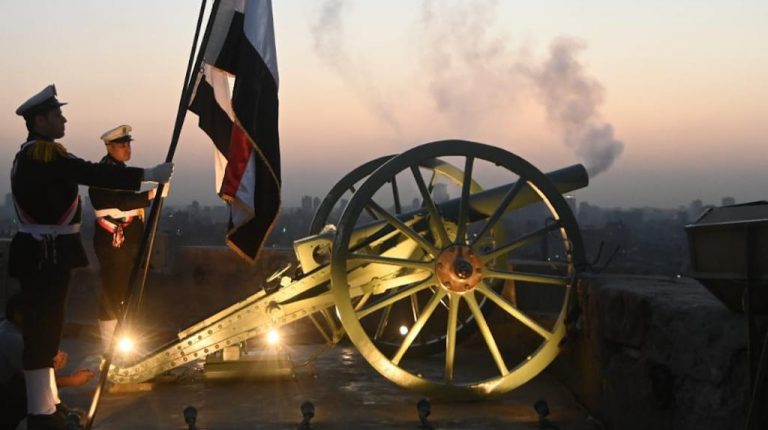 Almost everything in Egypt has a historical background and several folk stories that were transmitted to us through different generations. The Iftar Cannon is an Egyptian old story related to the holy month of Ramadan and has always been associated with happy moments for millions of Egyptians.

The Ramadan cannon is fired at sunset every day during the holy month to announce the breaking of the fast.

After almost 30-year pause, the Ministry of Tourism and Antiquities has announced that the Ramadan Cannon will be fired again from the square of the Police Museum in the Citadel of Salah Al-Din Al-Ayyubi in Cairo as it was in the past, after the Ministry restored its use.

Osama Talaat, Head of the Tourism and Antiquities Ministry’s Islamic, Coptic and Jewish Antiquities Sector, said that there are many stories surrounding the Ramadan cannon. They all confirm that it originated in the city of Cairo, specifically in the Citadel of Salah al-Din in Cairo.

Although 30 years have passed since its suspension, it has remained in the hearts and minds of Egyptians, as it has become a well-established tradition and an aspect of the holy month.

One of the stories narrates that the Ramadan cannon dates back to the reign of the Mamluk Sultan Khaskadam, when he wanted to try a new cannon and ended up test firing it at sunset on the first day of Ramadan in 1467 CE.

This caused people to think that the Sultan had deliberately fired the cannon to alert those fasting that it was time to break their fast. The masses of the people went out to the seat of government to thank him for the good innovation that he had introduced, and when the Sultan saw their pleasure, he decided to proceed with the firing of the cannon every day to mark the time for breaking the fast.

Another story tells of some soldiers during the reign of Khedive Ismail who were testing one of the cannons, and a shell was launched from it that rang in the sky of Cairo.

This happened to take place at the same time as the sunset call to prayer (aazan) on the first day of Ramadan, making people think that the Khedive was following a new tradition to announce the time for breaking the fast.

When Hajjah Fatima, daughter of Khedive Ismail, learned what had happened, she liked the idea, and asked the Khedive to issue a decree to make the firing of the cannon a new Ramadan habit, and at that time it was known as Al Hajjah Fatima cannon, and later its firing was added to the Suhoor and official holidays.

It is believed that the cannon was changed more than once and moved to more than one place. It is currently displayed in the square of the Police Museum at the Salah Al-Din Al-Ayyubi Citadel in Cairo.

It is a Krupp brand cannon produced in 1871 AD, and features an iron pipe resting on an iron base with two large wheels made of wood with iron frames. It is operated by two soldiers, one to insert gunpowder and the other to fire the shell.

Eman Zidan, Assistant Minister for Archaeological Sites and Museums, said that the restoration work on the cannon came as part of the ministry’s plan to raise the efficiency of tourism services in museums and archaeological sites. This includes those services found at the Cairo Citadel.

She said that the cannon will be fired at sunset every day during the holy month to announce the breaking of the fast. This will ensure the preservation of the Citadel’s archaeological heritage, whilst keeping up with the use of modern technology by firing a laser beam next to the cannon.

Mustafa Waziri, Secretary-General of the Supreme Council of Antiquities, said that the cannon’s restoration included removing a layer of rust that had formed on the body, and cleaning it from the inside