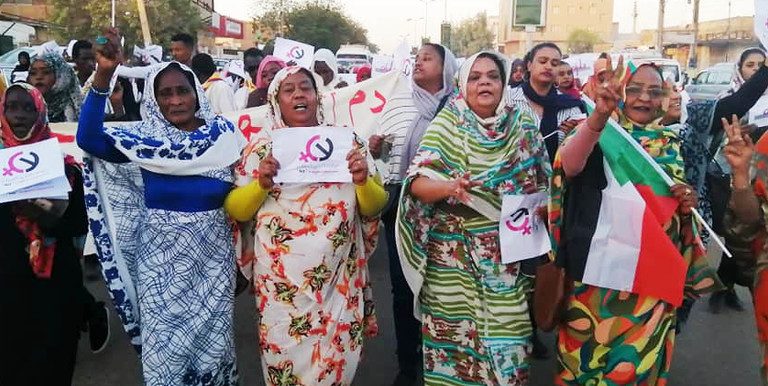 Once again, the Convention on the Elimination of All Forms of Discrimination Against Women (CEDAW) raises controversy in most Arab countries.

This comes especially after the Hamdouk Transitional Government in Sudan announced its intention to sign this agreement after many years of Sudan’s rejection of this document.

In fact, Sudan is considered, on the official and legislative levels, one of the most Islamic countries that rejected CEDAW.

However, some believe that the Sudanese state at the official level has begun to back down from its old position towards the agreement, and it has begun to talk about reservations, not rejection. Even though, many religious institutions still categorically reject any talk of adopting or endorsing CEDAW.

For this reason, the call of Sudanese Prime Minister Abdullah Hamdouk to ratify CEDAW agreement sparked a state of division in the Sudanese street. This dispute led to the announcement of a feminist initiative under the name “Sudanese women against CEDAW”, and delivered a protest to the Ministry of Justice, regarding its intention to sign the convention.

Meanwhile, the same call to sign the agreement met with approval among feminist activists who fought for three decades against the former regime, as female jurists expressed in consultation sessions and several seminars and intellectual meetings that the previous government’s refusal to sign the agreement was unjustified.

In fact, CEDAW has been raising controversy in Arab countries since its adoption in 1979, as it is the most comprehensive global human rights paper for modern women’s rights concepts. It consists of thirty articles calling for absolute equality between women and men in all fields.

It emphasises the principle of individuality, meaning looking at women as an individual, whether she is single, married, divorced, or widowed. The agreement calls for the abolition of discrimination against women and affirms their political, economic, social, and health empowerment.

The real problem with CEDAW lies in that, for many years, there has been the contradiction in views between countries that have some reservations to the convention and Amnesty International, which considers this document part of its organised campaign to eliminate violence and discrimination against women.

On the one hand, most Arab countries, such as Egypt, Lebanon, Jordan, Mauritania, Saudi Arabia, Algeria, Kuwait, Iraq, and Yemen, see that the provisions of this agreement, the way of drafting it, and the words used are too broad.

They also view the agreement as bearing many interpretations and vague connotations that are difficult to define and may contradict with Islamic Sharia law, even though there are no clear texts against religions or traditions, and the most important of these provisions is the second clause and the 16th clause.

Moreover, some other Islamic countries, such as Tunisia and Morocco, have cancelled their previous reservations, indicating that there are different interpretations of Islamic provisions or “Sharia”.

The same debate about the style of writing the agreement and its drafting with broad words that may have ill-considered consequences still exists in the US to this day, and is not limited to Arab countries only.

Although President Jimmy Carter’s administration was one of the first countries to sign CEDAW in 1979, this agreement has not been ratified by the Senate. The Senate Foreign Relations Committee, tasked with ratifying international treaties and agreements, has discussed CEDAW five times since 1980, but reservations on some of the articles of this convention are still in place and stand against the ratification of this convention to bring it into force.

Indeed, many prominent figures in the US, such as former Secretary of State Colin Powell and [the late Senator] Jesse Helms, described this agreement as a “complex and mysterious” agreement. They thought it may lead to the decriminalisation of prostitution and the use of abortion as a method of family planning, even though the explicit provisions of the agreement do not state any of these allegations.

Genuinely, the CEDAW agreement contains many articles and texts that would eliminate discrimination against women in many areas.

The most important of these items is the clause on eliminating discrimination against rural women, as they are among the most oppressed groups in developing countries. It is also the item recommended by the Egyptian Ambassador Naela Gaber, a member of the CEDAW Committee at the United Nations.

But despite this, the controversy over CEDAW will not end easily, as the real challenge in front of the agreement is to find a clear and binding global text that satisfies all countries around the world without the possibility of conflict with any of the prevailing religions or norms.

Accordingly, the real task facing CEDAW is to reach a non-disputed global document that brings the whole world together with its various cultures and religions in the context of globalisation, which is an impossible task.

Dr. Marwa El-Shinawy, PhD in American Theatre and member of the Higher Committee for the Cairo International Festival for Contemporary and Experimental Theatre