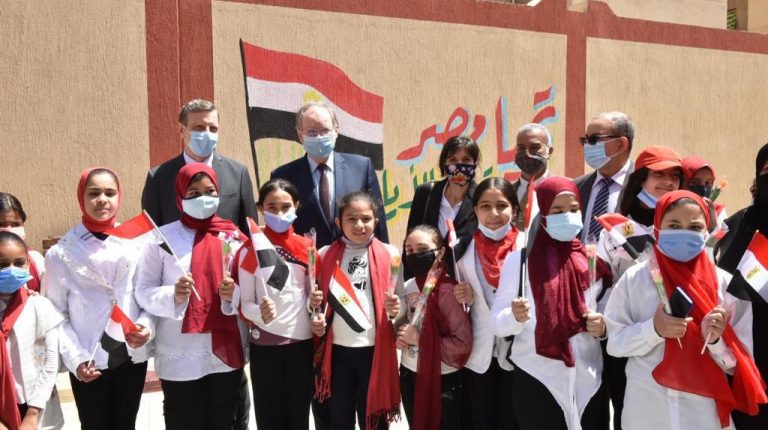 The visit took place in Port Said , one out of the six governorates that the programme is covering.

Ambassador Christian Berger, Head of the EU Delegation to Egypt, together with Alfredo Abad, Regional Representative for the Near East of the EIB, led the visit to the projects. They were accompanied by MSMEDA representatives, namely: Medhat Masoud, Head of Community and Development Sector and Wael Hamed, Manager of the Port Said Office. Port Said Governor General Adel El Ghadban received the delegation.

Minister of Trade and Industry and MSMEDA Executive Director, Nevine Gamea, said, “The visit underlines the close cooperation between MSMEDA and the EU, a key long standing development partner that supported MSMEDA activities over the past decade.”

The minister stressed that MSMEDA also cooperates with a large number of international agencies, foremost of which is the EIB which is an important partner in several development projects across Egypt.

“From July 2014 to February 2021, MSMEDA mobilised EGP 322.6m for Port Said in loans and grants, with loans amounting to EGP 304.1m to finance the establishment of 9,000 small and micro enterprises which created about 16,000 job opportunities,” Gamea said, “Grants totalling EGP 18.5m were earmarked for infrastructure, human, and community development projects and resulted in around 44,000 daily jobs for youth in Port Said Governorate.”

Ambassador Berger highlighted that this programme helps improve the well-being and livelihood of communities, and is key part of the broader framework of cooperation between the EU and Egypt. To date, this has amounted to more than €1.2bn in grants.

Berger said that urban community development is a priority of EU-Egypt cooperation, with a focus on sustainable development at the local level. This is through community-based solutions and involves local residents from design to implementation.

Abad said the visit falls as part of the Agreement signed with MSMEDA and co-funded by the EU to be implemented in six targeted governorates, including Port Said.

Meanwhile, El Ghadban noted that MSMEDA is keen to launch initiatives and agreements in coordination with numerous donor agencies to serve development objectives in Egypt.

Maosud indicated the programme is funded by a €15m grant from the EU and is accompanied by a €45m loan at preferential rates by the EIB. The EU grant aims to improve local infrastructures and services in selected urban communities, employ local workers, while the EIB loan will offer new credit lines to small and medium enterprises (SMEs).

This will support the provision and enhancement of community facilities, including potable water networks, sewage networks, paving side roads with interlocking paving, schools, health clinics, and youth centres.