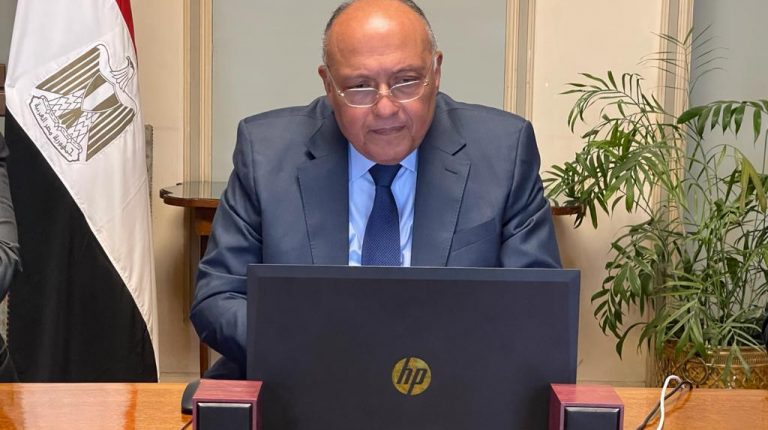 In a speech during the event, Shoukry highlighted the importance of concerted international efforts to confront the repercussions of the global pandemic, particularly those efforts related to providing vaccines.

The minister referred to the difficulties facing the international system in relation to providing vaccines in a fair and equal manner.

He noted the great disparity in the ability of states to access them, as well as the primacy of national interests without taking into account the issue of equitable distribution.

Shoukry referred to the export restrictions that were applied to manufacturers, represented in high-income countries monopolising the vast majority of vaccine production, which he said had an effect on prolonging the pandemic.

The minister called for the need to continue providing financial support to the Global Vaccine Access Facility (COVAX), set up by Gavi, the Vaccine Alliance.

Shoukry called for support of developing countries with manufacturing capabilities to expand the base of vaccine production, and the appropriateness of studying various alternatives to achieve this.

He also proposed temporary exemption from some of the obligations under the Agreement on Trade Aspects of Intellectual Property Rights. This includes work for a prompt and effective response to the relevant requirements of Africa.

This participation comes in light of the continuous efforts that Egypt is making in various international forums to provide equitable access to vaccines against COVID-19.

The Egyptian mission to the UN in New York, among a group of countries from different regions, presented an initiative at the UN General Assembly to launch a political declaration on fair access to vaccines.

More than 180 countries joined the initiative, to emphasise the need for international action, and to ensure that the vaccine and the technology associated with its production are available to developing countries at reasonable prices.

The initiative also included a commitment to transparency and the provision of information related to the prices, safety, and efficacy of different types of vaccines. It would also ensure that the vaccine reaches all people without discrimination.