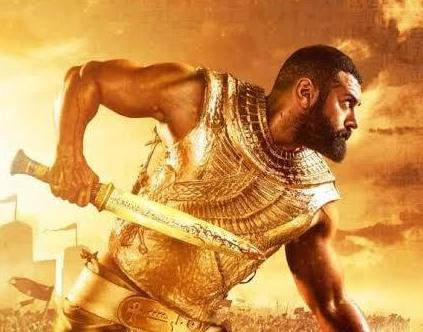 The El-Malek (The King) series is trending again on Twitter, after media reports indicated that its filming has been resumed.

The Al-Ittihad website wrote that shooting is now taking place at the Pharaonic Section of the Egyptian Media Production City, but that this is only for minor scenes.

Filming on the series was halted only a week before it was set to premiere for the Ramadan 2021 season, after its trailer caused a backlash on social media over perceived historical inaccuracies.

The viral status of opposition was against the series, costume designs, battles, and the actors’ styles, in addition to historical mistakes.

As a result, the producers decided to suspend production and to form a committee of specialists in history, antiquities, and sociology to review the events. This was also to work on re-scripting the scenario, resulting in the series being dropped from the Ramadan marathon.

Furthermore, numerous scenes would be re-shot including the majority of those in which Amr Youssef, who plays the Pharaoh Ahmose I, appears.

The series is based on the novel Thebes at War by the legendary Egyptian and Nobel Literature Prize-winning author Naguib Mahfouz, which was published in the 1940s.

The series is written by Khaled Diab and Sherine Diab, directed by Hussein Al-Manbawi, and stars Amr Youssef who plays the lead of Ahmose I, Saba Mubarak, Reem Mostafa, and Maged El-Masry.

The controversy surrounding the series started early with the casting of the green-eyed actor Youssef in the role of the Pharaoh.

Further criticism was aimed at some of the actors having beards. Commenting on this issue prominent archaeologist and Egyptologist Zahi Hawass was quoted as saying “Egyptian kings did not grow beards and moustaches in the way we saw”.

He added that he did not like the costume design at all, asserting that Egypt is full of qualified artists capable of designing convincing costumes.