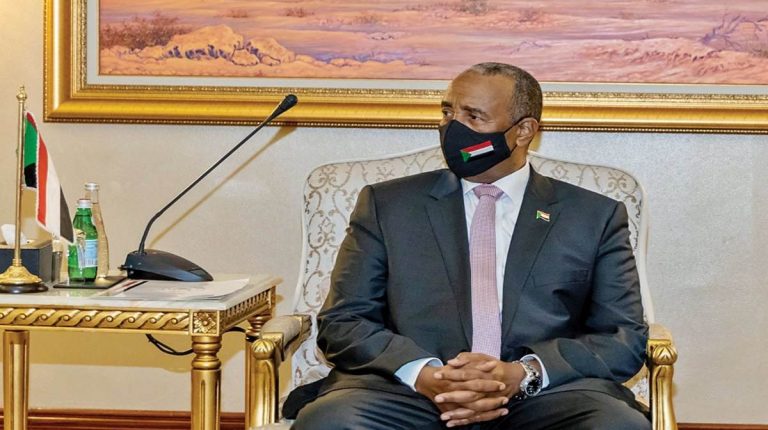 Abdel Fattah Al-Burhan, Head of the Sudanese Sovereignty Council, has said that his country wants a legally binding agreement on the controversial Ethiopian dam, rather than war.

Al-Burhan’s comments came as he shed light on many issues of concern to the Sudanese people during his interview on the Al-Arabiya satellite channel on Friday.

During the meeting, Al-Burhan addressed the contentious issues with Ethiopia, whether the controversial Nile Dam or the border problem. He also talked about the economic situation in the country, the agreement with the Criminal Court regarding the trial of former president Omar Al-Bashir, and even rumours of a dispute with Prime Minister Abdullah Hamdouk.

As for the military tension with Ethiopia, Al-Burhan stressed that his country views Ethiopia as a neighbour and hostility is not an option.

Burhan appealed to Ethiopia to withdraw from Sudanese territory, adding, “We are ready to coordinate on the borders.”

He also affirmed that his country’s position on the issue of the Nile Dam negotiations is clear. He also noted that  Sudan wants a binding agreement to fill and operate the Grand Ethiopian Renaissance Dam (GERD) that takes into account the interests of the three countries.

Al-Burhan praised the efforts of the transitional government headed by Prime Minister Hamdouk in leading the country, noting that there were no differences between the two bodies.

He also confirmed that Sudan is currently reaping the benefits of the country’s recent removal from the US State Sponsors of Terrorism.

Al-Burhan said, “We have made great strides to achieve this, noting that the unity of Sudan is the top priority of the government during the transitional period.”

He described what happened in the state of El Geneina as “extremely regrettable”, and that previously introduced solutions did not touch the real problem.

He also indicated that the lack of information on the security services contributed to complicating the problem in El Geneina.

Al-Burhan highlighted that the proliferation of arms in Sudan is unacceptable, but that the state is continuing its efforts to disarm the citizens.

He also referred to the agreement with the International Criminal Court (ICC) on the appearance of ousted President Omar Al-Bashir.

Al-Burhan said that the court has not yet asked Sudan to hand Al-Bashir over, and it does not oppose Al-Bashir’s trial in Sudan.

He revealed that there are arrangements relating to the security aspects with Israel to combat terrorism, and added that the US is a true and strategic partner for Sudan. Al-Burhan noted Sudan’s hopes to accelerate the pace of economic relations with the US.