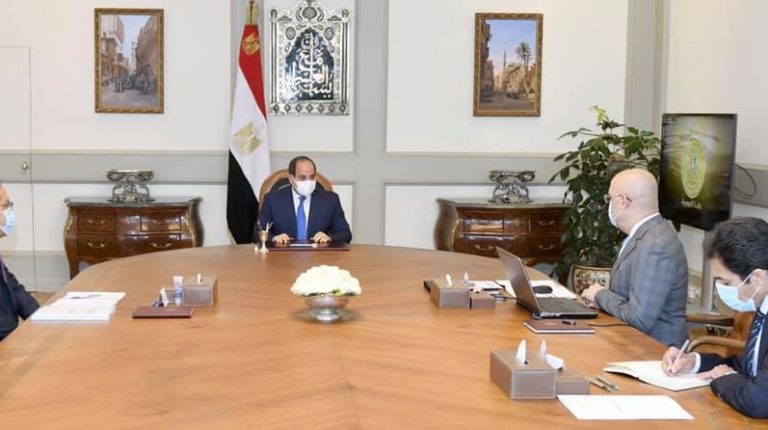 The meeting reviewed the executive position of the Ministry of Housing, Utilities and Urban Communities’ national projects, especially with regard to new cities, road sectors, utilities, housing, services, and slum development.

During the meeting, the President directed for a reliance on the new work paths and mechanisms that were followed in the completion of national projects during the past few years. This falls outside the traditional bureaucratic scope of planning and implementation.

According to the presidency, this way has led to the speed and reliability of actual achievement on the ground, and the achievement of development results that pave the way for a better future.

The meeting also touched on the axis of development and the establishment of new cities, as El Gazzar presented the executive position of facilities, installations and services in the cities of New Assiut, New Aswan, and New Mansoura. This was in addition to the ongoing development work in Assiut city.

Moreover, the meeting addressed the construction works at the New Administrative Capital (NAC), and its residential neighbourhoods.

This also included the government district, finance and business districts, and the Central Business District (CBD), as well as the Green River and the housing programmes in Badr City for workers in the new capital.

Additionally, El Gazzar outlined the progress of work at New Alamein City, and the projects it includes, such as: the towers; residential neighbourhoods; the heritage city; the Latin Quarter; the recreational area; residential complexes; and the International University of Science and Technology of El Alamein.

The minister also briefed the President on the ongoing projects to develop various neighbourhoods and regions in Greater Cairo. These include the development of 6th of October, as well as Al-Warraq Island, and the comprehensive development of Historic Cairo.

The Historic Cairo development project includes ​​Lake Ain Al-Sira, the vicinity of the National Museum of Egyptian Civilization (NMEC), and the Fustat Park. This also refers to the ongoing development process in the area of ​​El-Madabegh and the Sour Magra El Oyoun, as well as the Maspero Triangle.

Furthermore, El Gazzar presented the efforts made by his ministry in the water treatment and desalination plants sector, as well as the ongoing projects to provide alternative housing units for informal settlements.