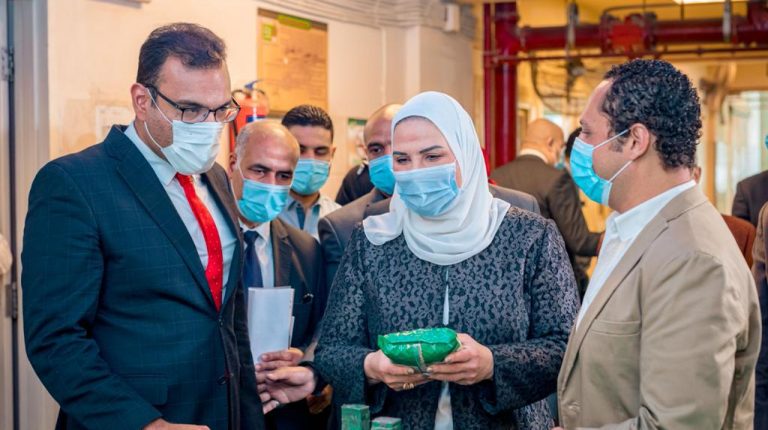 Egypt’s Minister of Social Solidarity Nevine El-Kabbaj has attended the Egyptian Food Bank celebration ceremony, as the latter completed the first round of Ramadan food box distribution across Egypt.

The food box distribution comes as part of the Egyptian Food Bank’s campaign for the holy month of Ramadan, called “Iftar Saem”.

El-Kabbaj expressed her pride at the work of civil society as a principal partner for the ministry’s plans and initiatives.

She noted that the upcoming period will witness close cooperation between the ministry and several civil society organisations.

“The Egyptian Food Bank is a successful model for establishing cooperation with the private sector for social investments to achieve social justice and equality,” El-Kabbaj said, “It is a priority to consolidate efforts of different institutions through public-private partnerships, in line with the state’s plan to develop communities.”

It aligns with the ministry’s initiative ‘The First 1000 Days of the Child’s Life’, which aims to provide each child with a solid mental, emotional, and physical structure.

El-Kabbaj also discussed her ministry’s progress towards digital transformation, highlighting its unified database, which is used to measure the number of beneficiaries in need of support. This ensures the beneficiaries receive the proper resources to carry out a healthy up to standard life.

She added that the Ministry of Social Solidarity’s ultimate goal is to economically empower these families.

“During the past 15 years, the Egyptian Food Bank, the Egyptian Cure Bank, and the Egyptian Clothing Bank have been working tirelessly towards providing the necessary food supplies, clothing and medications to the beneficiaries,” El-Kabbaj said.

She also expressed her ultimate gratitude to the volunteers and local associations in different governorates who greatly contribute to the success of delivering the items to the beneficiaries.

Egyptian Food Bank CEO Mohsen Sarhan announced that the first phase of the “Iftar Saem” campaign had been completed. This phase involved distributing a large number of Ramadan food boxes and meals to the less fortunate across Egypt.

The Bank is set to launch a new round of the campaign to distribute food boxes throughout the holy month, doubling its activities to distribute 54 million food boxes. This comes in addition to 10 million cooked Iftar and Sohour meals, bringing the total number of meals distributed during the month to all governorates to 64 million.

He also affirmed the Egyptian Food Bank’s keenness to diversify food supplies distributed throughout the campaign to compensate the absence of Charity Iftar tables this year due to the precautionary procedures decreed by the Prime Minister that prohibits crowdedness.

“The Initiatives undertaken by the Egyptian Food Bank over the course of Ramadan are among the most important activities of the bank throughout the year,” Sarhan said, “For the Bank’s comprehensive database, that reaches up to almost 1 million beneficiaries from all over Egypt, we work with 6000 Community Development Authorities, along with the support of 40,000 volunteers to deliver Ramadan supplies and food boxes for them.”

Sarhan stated that the bank is delivering “Iftar Saem” supplies to beneficiaries living in less fortunate areas, especially those places where extreme poverty, disease, and destitution are widespread. The supplies are delivered to villages, overcrowded areas or border regions that are not accessible to other charitable institutions.