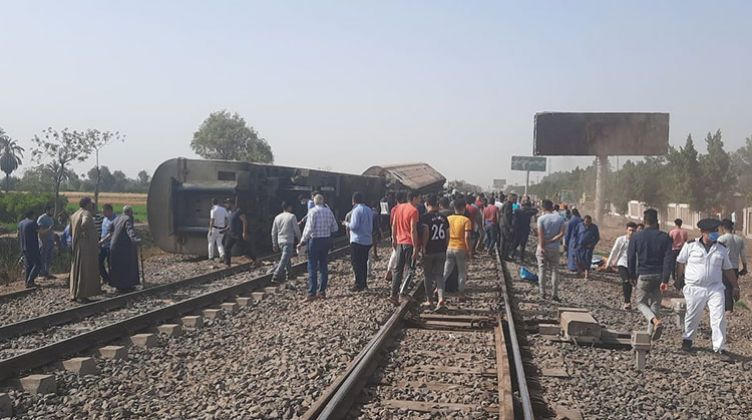 Egypt’s Ministry of Health and Population has announced that 11 passengers have been left dead as a result of a train derailment in Banha, whilst 98 others were injured.

The recent derailment is the third train accident in Egypt to occur in less than a month.

Minister of Health and Population Hala Zayed said that she is monitoring updates of the accident, to assess the health status of those injured and the medical services provided to them.

She is also reviewing the availability of all medicines, medical and surgical supplies, and blood bags available in hospitals that received the injured.

Railway services were suspended in northern Egypt, on Sunday, after the Cairo-Mansoura Train 949 left the tracks at Sandhour near the town of Toukh, about 30km north of Cairo.

President Abdel Fattah Al-Sisi has directed for a committee to be formed, to find out the causes of the accident. The initial reports said that the train derailed for unknown reasons and did not collide with other trains or any obstacles on the way.

The Ministry of Health and Population said that immediately after the accident, 60 ambulances rushed to the scene. The injured were transferred to the Banha Teaching Hospital, the Qalioub Hospital, and the Banha University Hospital.

According to a statement released by the ministry, all those injured are receiving the appropriate medical care. The statement also noted that the degree of preparedness at all hospitals in Qalioubiya Governorate has been raised to the utmost level.

Most of the injuries are fractures, cut wounds, and abrasions in separate places of the body, according to the statement of the ministry that pointed out that 14 cases who were suffering minor injuries were discharged from the Banha Teaching Hospitals and Qalioub Hospitals after receiving the required medical care.

Three cases have been transferred to the Nasser Institute Hospital, where they will undergo urgent surgery.

A team from Egypt’s Public Prosecution headed to the accident site and has opened an immediate investigation.

Meanwhile, member of the House of Representatives Farid Al-Bayadi submitted an urgent statement to the parliament about the Toukh train accident.

In his statement, Al-Bayadi accused the executive authority of negligence, and placed political responsibility on Minister of Transportation Kamel El-Wazir.

He also called for the formation of a committee of parliamentary members and experts to investigate the facts. The committee would also determine what financing was spent on developing Egypt’s railway system and the time plan for completing the development projects.