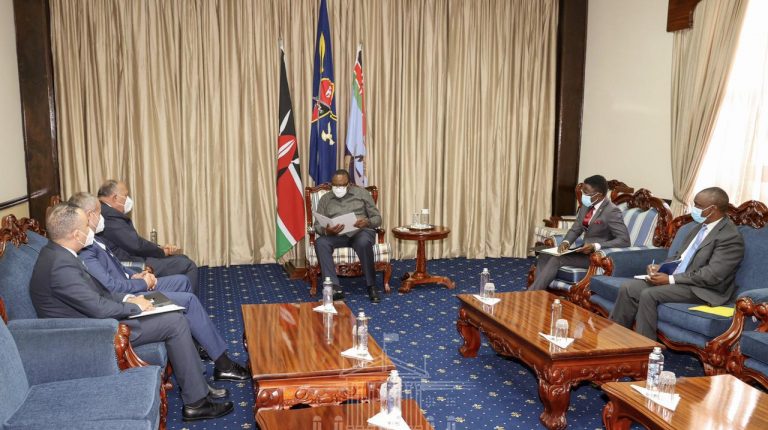 Egypt’s Minister of Foreign Affairs Sameh Shoukrymet on Monday with Kenya’s President Uhuru Kenyatta, at the start of his tour to a number of African countries.

Nairobi represents the first leg of the African tour that includes the Comoros, South Africa, the Democratic Republic of the Congo (DRC), Senegal, and Tunisia.

Shoukry was carrying messages from President Abdel Fattah Al-Sisi to his brothers, presidents, and leaders across the continent, outlining Egypt’s position on the controversial Ethiopian dam.

Hafez said that during the meeting with the Kenyan President, Shoukry delivered the Egyptian President’s message regarding the status of negotiations on the dam.

The message also outlined the Egyptian position regarding the controversial Ethiopian project. Shoukry referred to the pioneering Kenyan role in Africa in many fields, and in light of its non-permanent membership in the UN Security Council representing the continent.

Hafez said that Shoukry was keen to review the recent events at the Kinshasa meetings, which were hosted by the DRC on 4-5 April.

Hafez noted Egypt’s aspiration to work with the countries and parties concerned to find a solution to the crisis that preserves regional security and stability.

During the meeting, the two sides discussed bilateral affairs, with Shoukry noting the depth of Egyptian-Kenyan relations. He noted his appreciation of the existing political will on both sides to develop them and take advantage of the momentum they are currently witnessing.

Shoukry affirmed Egypt’s interest in supporting priority development projects in Kenya, as well as expressing his country’s keenness to support the country in various fields.

The minister addressed the path towards a legally binding agreement on filling and operating the dam in a manner that takes into account the interests of the three countries involved in the negotiations, namely Egypt, Sudan and Ethiopia.

He also addressed Ethiopia’s decision to commence the second filling of the dam unilaterally.

Shoukry affirmed the fundamentals of Egypt’s position, calling for the launch of a serious and effective negotiation process that will result in reaching the desired agreement.

Egyptian former Minister of Foreign Affairs Mohammed Al-Orabi appreciated President Al-Sisi’s move, stressing that communication with African countries at this stage is important to clarify Egypt’s position and that of Ethiopia.

He added that Ethiopia had violated the charter of the African Union (AU), whose headquarters are in the Ethiopian capital, Addis Ababa.

He noted that Ethiopia is manipulating African cohesion and a spirit of constructive cooperation, whilst fuelling hostility among African peoples.

He added that the international community has not played any role denoting the seriousness of the situation, or indicating the existence of a dangerous situation that increases tension in the Horn of Africa.

In the same regard, former Minister of Water Resources and Irrigation Mohamed Nasreddine Allam said that Shoukry’s effort represents a continuation of his Ministry’s work to inform key hubs in Africa about GERD developments.

He said that the permanent members of the UN Security Council, as well as those who have economic and political interests in the Horn of Africa, have been informed of the Egyptian position.

If Ethiopia is serious about its proposal to conclude an urgent agreement with Egypt and Sudan on filling and operating the dam, it should not try to start the second filling under the guise of negotiations, he said.

Allam stressed that Ethiopia should listen well to warnings from Egypt, Sudan and US-Russian warnings not to take any unilateral actions without a binding legal agreement.