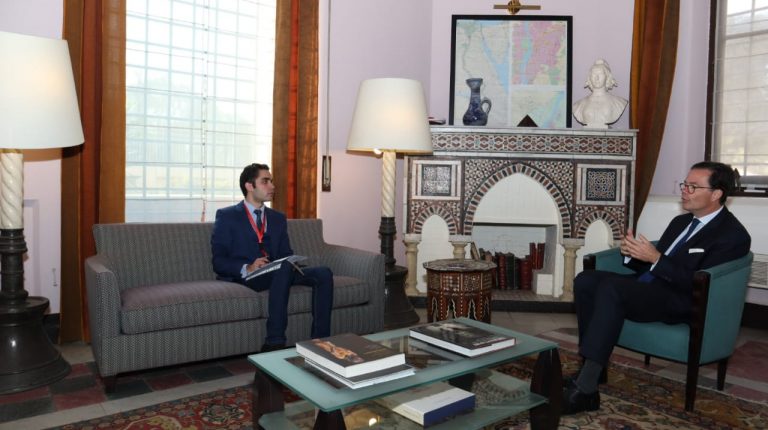 France has taken several significant steps to help development in Egypt, according to Stéphane Romatet, French Ambassador to Cairo.

In an interview with Daily News Egypt, Romatet highlighted the efforts made by France, and its business sector, to invest in Egypt, particularly in new cities and transportation.

At the same time, the Ambassador made note of the shared efforts between France and Egypt in combatting terrorism and applying democracy. This has become a major source of tension globally, particularly following the publication of caricatures of the Prophet Muhammed in France.

Here, Ambassador Romatet explains more on his country’s stance regarding a range of issues.

What sectors are likely to see increased French investments in Egypt?

There are several sectors that France feels requires its resources and in which it should pay more focus. These sectors are a key element for achieving long-term development in Egypt, the first one of course being everything related to infrastructure. Here, I would say smart cities, which are reflected in the big projects in Egypt, focusing on certain new cities such as the New Administrative Capital (NAC).

We think that our companies could bring their expertise in this area, as we have world-class companies, especially in the transportation sectors. We also think that the mobility sector is an important one for us to invest in, in Egypt.

We have a record of involvement in development in Egypt, including with the Cairo Metro project that is considered an iconic partnership between the two countries, so the priority for us is infrastructure, new cities, and mobility.

The second area is energy. Egypt is a country with much potential in the field of energy, not only in offshore resources, but also in renewable energies.

What about the cooperation between the two countries in the health sector?

We not only tried to assess Egypt in many medical fields, but we have also established cooperation in the sector. Despite the novel coronavirus (COVID-19) pandemic, Egypt’s situation is under control, and has kept quite strong against the pandemic. The Egyptian Government has made coexistence between the economy and the pandemic a real possibility, which was not the choice in many other countries, such as France.

The economy is still growing normally despite the issue of overpopulation, with Egypt in a better situation compared to other countries. The pandemic motivated us to become more cooperative.

The efforts done by the Egyptian Government are positive, and the country’s economy is seeing growth. It is in a good situation compared to Europe. In the early stages of the pandemic, France decided to allocate financial aid to Egypt.

In your point of view, how did France weather the storm that followed the publication of the Prophet Muhammad caricatures?

In France, everybody can express themselves freely. This is not the responsibility of the government, as freedom is in the French culture. However, there are some calls to boycott all French products. We see that this is not the answer to such individual action, as we need to understand the conceptions of each other which can be done through dialogue.

We can understand that such types of caricatures could hurt the feelings of faithful Muslims in Egypt and France.

Calls for boycotting the French products can be harmful to both the French and Egyptian people, as the French companies in Egypt are employing Egyptian workers, it doesn’t create quite the consequences.

France is currently leading a campaign against terrorism. Could this lead to a French decision to list the Muslim Brotherhood as a terrorist organisation?

We constantly try to debate such issues in government. There are many lists of different organisations that adopt violence and become terrorists.

Both France and Egypt try to fight terrorism, and to gradually apply democracy, with such issues also discussed with the government.

The death penalty is not a good response to terrorism, but instead we should consider civil rights.
Egypt and France share something in common regarding the efforts to combat terrorism, and this is the issue of victims’ toll. As a result, both countries share the same concerns concerning eliminating terrorism.

Regarding the Syrian crisis, Europe saw thousands of Syrians travel in waves across the continent in 2015 and 2016 as refugees.

There has been much dialogue between France, Italy, and Egypt on the one hand, and the refugees and immigration authorities on the other hand, to discuss such issues.

How do you evaluate the human rights situation in Egypt?

We have discussed this issue frankly with the Egyptian authorities. We don’t believe that democracy can be achieved in Egypt in one day and become just like Europe. Human rights, democracy, and freedom is a process that can move forward with time. The Arab region has the characteristics of freedom.

We have bilaterally discussed the issue of human rights with the Egyptian Government, but we put into consideration the nature of the region and that Egypt is different from Europe.

How is France dealing with extremists and Turkish terrorist organisations?

Turkey is a NATO country, so it has to behave according to the values of the organisation. It also has to belong to the same system as NATO. However, there is a contradiction between these values and Turkish behaviour on the ground.

The way Turkey behaves on the ground in eastern Libya proves that contradiction. We have also held discussions about the way that the Turkish President [Recep Tayyap Erdoğan] insulted the French President [Emmanuel Macron] in an unacceptable manner. We believe that through negotiations we can solve any issue.

To enhance good relations, we need an open and demanding dialogue. The question is how Turkey will come back to the behaviour required of NATO membership. We also need to discuss whether Turkey is helping to spread terrorism in France.

What is your response to the narratives circulated about Turkish Imams in France and their role in spreading terrorism?

France recognises that about 5 million people in Europe are Muslims. For France’s Muslim population [about 3.5 million], they all live under liberty, equality, and fraternity.

There is an issue in France in organising courses for training Imams of different nationalities, and who come from abroad. Those Imams looking to work in France should be trained in France according to French values. We will no longer accept Imams coming from abroad to work in French mosques, especially if they have training from outside entities. The French Government believes that influence from these countries can be negative.

Do you consider the recent developments in the Libyan file fruitful?

Libya is a top issue for Egypt and France. The recent developments in the country are good, namely, the introduction of a transitional government, the ceasefire, and the upcoming elections in December 2021. But the question now is how to make sure that Libya will remain a united country.

Stabilisation in the country is important to both France and Egypt, as we want Libya to remain a stable country that can rid itself of terrorism. We support the Libyan government as it could lead to political stabilisation.

How is France evaluating the Turkish intervention in Libya?

Turkey and Russia have sent troops to Libya, notably in the form of militias, but these countries need to leave Libya. The presence of these foreign powers is a key element in the turmoil which is delaying peace.