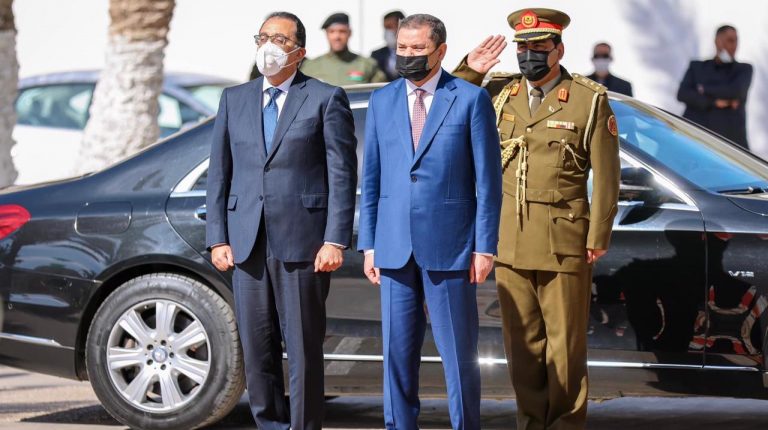 During a joint press conference with Prime Minister-designate of the new Government of National Unity (GNU) in Libya, Abdul Hamid Dbeibeh, Madbouly said that Egypt stands with Libya to settle all problems facing the neighbouring country.

The Egyptian Prime Minister arrived in the Libyan capital, Tripoli, on Tuesday morning, along with 11 ministers to discuss boosting cooperation between the two brotherly countries.

“My visit to Tripoli confirms Cairo’s support for Libya and the new Government of National Unity,” Madbouly said.

He added that this visit aims to set a timetable for several Memoranda of Understanding (MoU) to be signed between both countries.

He asserted that Tuesday’s visit aims to support Libya in its path of growth and progress, emphasising Cairo’s keenness to support all projects in Libya in different fields, including infrastructure, transportation, petroleum, and aviation.

Madbouly revealed that Egypt and Libya will jointly launch a maritime shipping line between both countries.

Moreover, Egypt will transfer its experience in developing the educational system to Libya, in addition to opening Egyptian school there.

Egyptian hospital and medical convoys will also be launched in Tripoli in the required specialties during the next period.

For his part, Dbeibeh hailed the distinguished historical ties between Egypt and Libya.

He also appreciated the Egyptian support for Libya, asserting that there are many cooperation projects between the two countries.