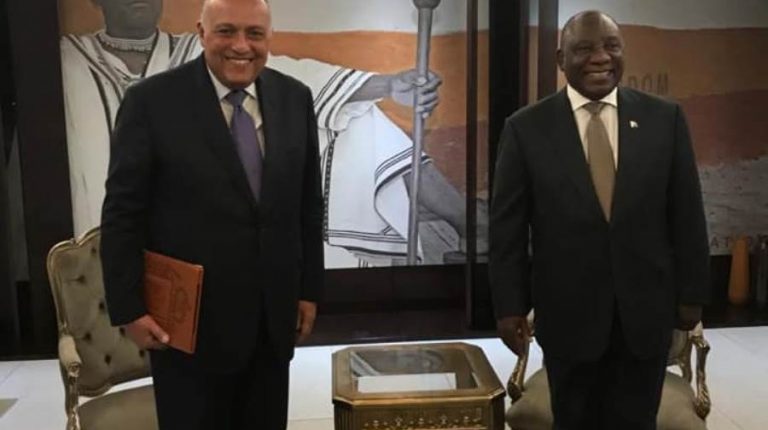 Ahmed Hafez, Spokesperson for Egypt’s Ministry of Foreign Affairs, said that the message dealt with the current status of the GERD negotiations, and Egypt’s position on this issue.

This comes as part of the country’s keenness to coordinate and consult with South Africa, in light of its position on the continental arena, and its current membership in the African Union (AU) Bureau.

Shoukry expressed Egypt’s appreciation for the efforts made by South Africa regarding the GERD issue during its previous presidency of the AU.

Hafez added that, during the meeting with Ramaphosa, the minister also reviewed the conclusions of the recent Kinshasa meetings which took place earlier this month to attempt to resolve the GERD dispute.

Shoukry stressed that Egypt has demonstrated during these meetings its sincere political will, aimed at launching a serious negotiation path.

Ultimately, Cairo hopes that this will lead to a binding legal agreement on filling and operating the dam that fulfills the interests of the three countries, namely Egypt, Sudan, and Ethiopia. This would not only preserve the rights of all three, but would also serve as a means to enhance regional security and stability.

The meeting between Shoukry and Ramaphosa also dealt with the bilateral relations between the two countries.

The minister affirmed Egypt’s will to continue strengthening relations between Egypt and South Africa in various areas of bilateral cooperation.

This comes in light of the close coordination between Presidents Al-Sisi and Ramaphosa, both bilaterally and continentally on various pressing issues on the African arena.

On Monday, Shoukry met President of the Comoros Othman Ghazali on the second leg of his African tour.

At the meeting, the minister was carrying a message from President Al-Sisi, dealing with the current status of the GERD negotiations. It also reviewed the Egyptian position in this regard.

Shoukry also presented a review to the Comorian President on the most important issues in the recent Kinshasa meetings.

He stressed Egypt’s aspiration to work with various countries and parties concerned with the aim of reaching a solution to this issue in a way that would prevent harm to regional security and stability.