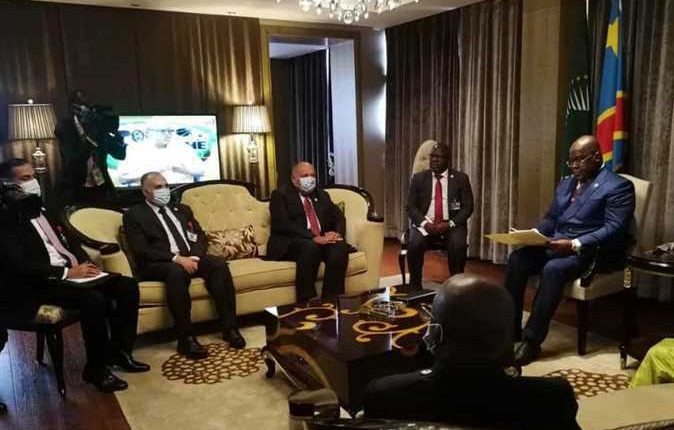 Egypt’s Minister of Foreign Affairs Sameh Shoukry met with President of the Democratic Republic of the Congo (DRC) Felix Tshisekedi, on Tuesday, on the fourth leg of his African tour.

Ahmed Hafez, Spokesperson for Egypt’s Ministry of Foreign Affairs, said that Shoukry was carrying a message from President Abdel Fattah Al-Sisi that dealt with the developments in the Ethiopian dam file. The message also outlined the Egyptian position on the controversial dam.

Shoukry affirmed Egypt’s keenness to coordinate and continue to consult with the DRC, which currently chairs the African Union (AUC), on various issues in the African arena.

The minister stressed Egypt’s support for the Congolese presidency of the AU, and its confidence in its ability to efficiently carry out this important responsibility.

During the meeting, Shoukry expressed Egypt’s appreciation for the tireless efforts made by President Tshisekedi on the issue of the Grand Ethiopian Renaissance Dam (GERD) in his capacity as the current AU president.

Shoukry highlighted the DRC’s hosting of the recent Kinshasa meetings, which took place on 4-5 April, and which served as efforts to resolve the crisis in negotiations.

During the Kinshasa meetings, Egypt showed a sincere will aimed at reaching a serious path of negotiations that would result in a binding legal agreement for filling and operating the dam.

The aim is that this would take place in a manner that secures the interests of the three countries affected by the dam, Egypt, Sudan, and Ethiopia, and maintains the security and stability of the region.