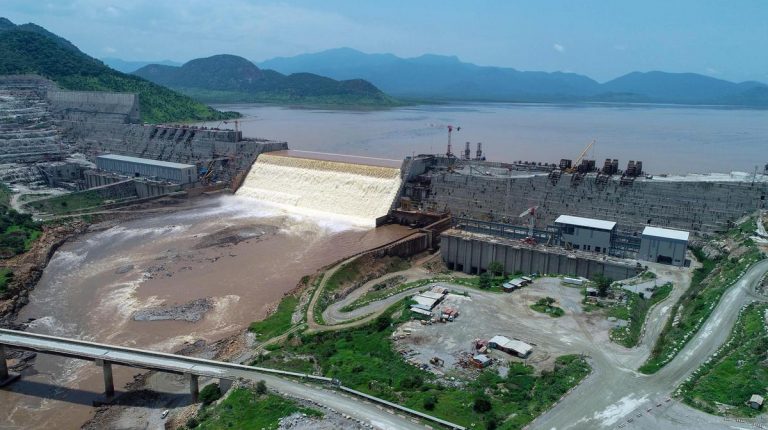 The successive developments in the Grand Ethiopian Renaissance Dam (GERD) crisis resemble the ravaging River Nile floods that occurred in the past, sweeping the homes of ordinary people away with them.

These floods also threatened many lands and crops in the downstream countries of Egypt and Sudan, until they succeeded in making good use of their resources through the agreements signed between them.

These took place upon the establishment of the High Dam and Lake Nasser, in the 1950s, which enabled Egypt to tame the waters of the River Nile, maintain its sustainability, generate electricity, and deal with periods of drought. It also contributed to raising Sudan’s share of River Nile water to meet all its needs all the time.

Many waters passed through the Ethiopian plateau to its last settlement, watered everyone, and the ears of grain grew. The official slogan of the Egyptian state was respect for international charters and treaties, and respect for the work of partnership and development between the Nile Basin countries.

The Egyptian position has remained the most stable and clearest in the crisis, especially since President Abdel Fattah Al-Sisi took the office in 2014, and carried with him a real agenda of action aimed primarily at the return of Egypt to its prominent role in Africa.

All of the above does not excuse the Ethiopian leadership in showing goodwill, through the media statements of its officials. These initially aimed to prolong the negotiations and to exploit the ethical policy that Egypt adopted since the first day, in giving significant space for discussion and for reaching a path that unites views. This is with the aim that the final agreement is on partnership and cooperation for the purpose of development.

The Ethiopian statements took on an aggressive tone, the last of which was Minister of Foreign Affairs Damaki Mekonnen saying that his country will never agree to what he called “unfair” conditions that seek to preserve the water hegemony of Egypt and Sudan.

Speaking during an online discussion organised by the Ethiopian Ministry of Foreign Affairs in cooperation with the country’s missions in Europe, Mekonnen also said that exerting unnecessary pressure on Ethiopia through a deliberate politicisation and internationalisation of the issue will not make the country accept the “colonial era” treaty on the Nile River.

A few days before those statements, the country’s media reported that the state had begun to open the upper gates of the dam, in preparation for the second filling process. This has raised questions about the effect of that process on the water coming to Egypt and Sudan.

Information indicates that opening the upper gates of the dam aims to reduce water in preparation for concrete pouring operations, and raising the dam to a level that may reach 595 metres. This is as planned by Ethiopia, in preparation for the start of the second filling of the dam’s reservoir within the next two months.

It was confirmed by a statement issued by Egypt’s Ministry of Water Resources and Irrigation, about the start of the Ethiopia dam’s second filling, and that it would deprive Egypt and Sudan of 20 billion cbm of water.

Moreover, Sudanese Minister of Foreign Affairs Maryam Al-Sadiq said in a media interview that Ethiopia took a “sterile” approach in the GERD negotiations. This came amid fears from the downstream countries, Egypt and Sudan, of affecting their share of water.

Al-Sadiq added that Ethiopia is sending incorrect messages in the GERD file, accusing Addis Ababa of trying to “lose consciousness”.

She stressed that Sudan remained supportive of the dam’s construction if it was done by consensus, noting that international rivers are governed by references and laws.

In this context, Daily News Egypt turned to experts on African affairs to shed light on the subtle developments in the GERD crisis, and how the official statements from Ethiopia should be dealt with.

Hany Raslan, a consultant to the Al-Ahram Center for Political and Strategic Studies (ACPSS), said that the Ethiopian statements regarding the historical treaties signed during the colonial era are out of context.

This is because the current negotiations and the text of the Declaration of Principles (DOP) are only about filling and operating the dam, and their goal is not to cause serious harm to Sudan and Egypt.

“There is no relationship or reference to treaties or water sharing,” he added, “Rather, these are issues that Ethiopia interfered with just to find propaganda arguments and pretexts to cover up its true position, which is the claim of ownership of the river.”

Regarding the path forward during the coming period, Raslan said that time is running out as Ethiopia has already started the procedures for mobilising the central sector in the dam. This is in preparation for the second filling.

So far, there are also no effective international or regional mediations, and Ethiopia reiterates that it insists on its position. This means that the region is on the verge of a protracted conflict, which will result in widespread instability and unmanageable repercussions.

He said that Egypt has adapted a cooperative path and seeks to avoid confrontation or conflict, but Ethiopia insists on pressuring Egypt and Sudan into making difficult choices. These involve either surrendering to turning the River Nile into an Ethiopian possession, or defending themselves and their peoples’ right to life and development.

Regarding Ethiopia’s claims that the failure of the Kinshasa negotiations did not come from its side, Raslan said that these lies have become exposed.

He notes that it is, in fact, Ethiopia that rejected all proposals that the Quartet be mediators or even facilitators or any proposal of any kind. It has, instead, encouraged the tripartite negotiation formula. The latter has still not seen success, even after ten years.

Regarding Ethiopia’s call to the UN Security Council to urge Egypt and Sudan to return to the negotiations table, Raslan views the Ethiopian leadership as overwhelmed by its delusions.

Raslan said that the options have become narrow after all opportunities for negotiation have been exhausted.

Consequently, if the current situation continues and Ethiopia proceeds towards the second filling, the Egyptian position has been expressed in President Al-Sisi’s statements that all options are open.

This is a diplomatic term that means shifting to the path of confrontation and conflict, and this includes a wide range of tools and means, the highest of which is war.

For his part, Mustafa Dardig, a Sudanese researcher on African affairs, said that according to the international law of Ethiopia, it is not entitled to not recognise international agreements on the pretext that they were signed during the colonial era. The statement by Ethiopia’s Mekonnen expresses the country’s stance on the matter, as a clear and explicit refusal to abide by the covenants and international treaties.

He added that despite this, Egypt and Sudan send positive messages of genuine desire to reach a fair agreement that would bring everyone’s interests.

Sudanese Prime Minister Abdullah Hamdouk called upon his Egyptian and Ethiopian counterparts to a tripartite summit meeting. These would try to bring the negotiations back from the brink, based on the agreement of principles signed by Egypt, Sudan, and Ethiopia in 2015.

On the military option, Dardig said that Sudan’s Al-Sadiq has ruled out resorting to the “military option”, to prevent Ethiopia from continuing the dam construction project.

Dardig also reiterated the statement by the President of the Sudanese Sovereignty Council, Abdel Fattah Al-Burhan, who noted, “We are negotiating and holding dialogue with the Ethiopian side through African mediation but to no avail.”

This statement indicates Khartoum’s desire to expand the mediation circle, and to break it out of the circle of the African Union (AU). The Quartet initiative was the best evidence, which Addis Ababa did not approve of.

“In my opinion, what complicates the GERD file the most is the public opinion in Ethiopia and Egypt, in particular from the Ethiopian side, especially taking into account how it’s being used in the upcoming elections,” Dardig said, “This makes the Ethiopian leadership prefer the populist discourse to respond to external voices.”

He, however, believes that the option of proposing the Quartet mediation by the AU, the European Union (EU), the UN Security Council, the UN, and the US, which Ethiopia had reservations on, is still an option.

The researcher proposes that it become a group of five, with the invitation of China to join the mediation, the country being an important player in the region. Their presence may also give more confidence to Ethiopian decision-makers.

As for some writings in the Sudanese press about the benefits of the GERD in Sudan, he said, they are individual writings in the newspapers. The Ethiopian dam remains a low priority in Sudanese public opinion, due to many other challenges and developments that dominate the country’s daily affairs.

As a result, it is not more than voices speaking that do not have a popular backer who agree in their opinion about the advantages of the dam, unlike the truth. But here we refer to decision-makers in Sudan, and in this important historical period that Sudan is going through, they are fully aware of the matter, and of the negative repercussions of the dam on Sudan, whether at the present time or in the future.