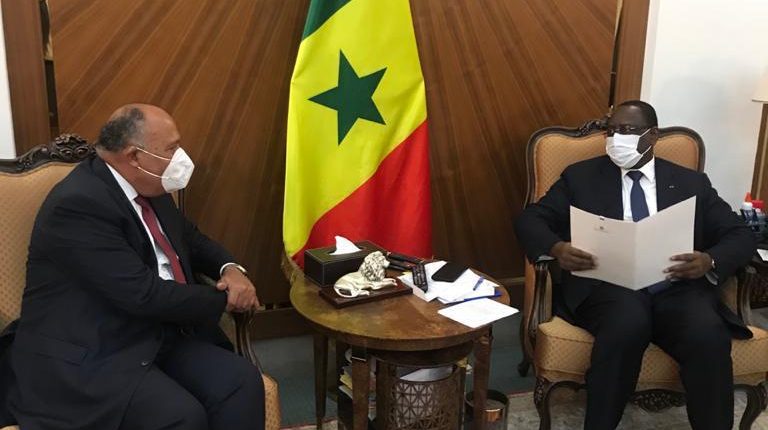 Egypt’s Minister of Foreign Affairs Sameh Shoukry met, on Wednesday, with President of Niger Mohamed Bazoum, and President of Senegal Macky Sall, as part of the former’s African tour.

The messages dealt with the current status of the Grand Ethiopian Renaissance Dam (GERD) negotiations and the Egyptian position in this regard.

Ambassador Ahmed Hafez, the spokesperson for the Egyptian Ministry of Foreign Affairs, said that Shoukry discussed with Bazoum and Sall the most important issues addressed in the recent Kinshasa meetings, which took place as part of efforts to resolve the dispute on the Ethiopian dam.

Shoukry stressed that Egypt has demonstrated during these meetings its sincere political will to conduct serious negotiations with the involved parties.

These negotiations aimed to reach a legally binding agreement on filling and operating the controversial dam in a way that preserves the rights and interests of the three concerned countries and ensures no harm to regional security and stability.

The Egyptian Foreign Minister concludes, on Thursday, his African tour by visiting the Tunisian capital, Tunis, where he met Tunisia’s President Qais Said, and also handed him a message from President Al-Sisi.

Tunisia and Kenya are currently the only two African countries that have non-permanent membership in the UN Security Council.

Tunisian President affirmed, last week, that his country would never accept Egypt’s water security to be compromised, stressing that both countries share the same stance in the international arena.