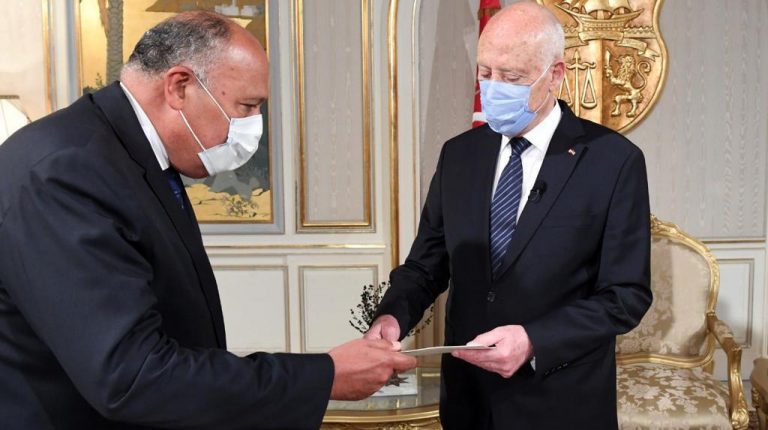 On the last leg of his African tour, Egypt’s Foreign Minister Sameh Shoukry met, on Thursday, with Tunisian President Qais Said, and handed him a message from Egyptian President Abdel Fattah Al-Sisi.

Ambassador Ahmed Hafez, the official spokesperson for the Egyptian Ministry of Foreign Affairs, stated that the message dealt with the latest developments in the Grand Ethiopian Renaissance Dam (GERD) talks and Egypt’s position in this regard.

Shoukry stressed Egypt’s keenness to coordinate with Tunisia in light of the close ties between the two countries, with Tunisia being a non-permanent member in the UN Security Council.

Hafez added that Shoukry presented a comprehensive review of the Kinshasa meetings regarding the Ethiopian dam.

He highlighted Egypt’s position during these meetings and the sincere will it showed to solve the crisis, and reach a legally binding agreement on the filling and operation of the Dam, in a manner that preserves the rights of the three involved countries, Egypt, Sudan, and Ethiopia.