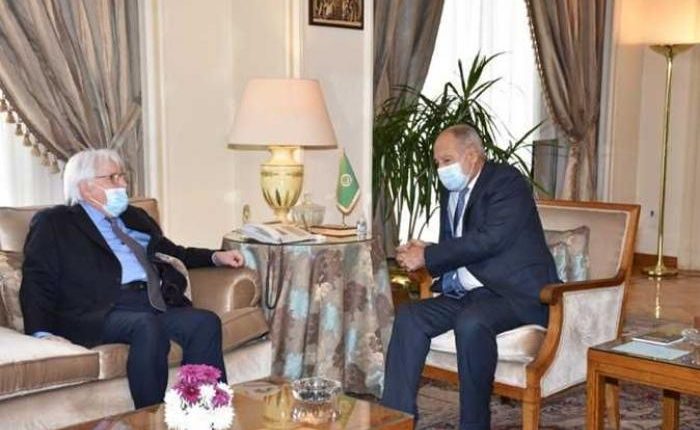 Secretary General of the Arab League, Ahmed Aboul Gheit, has met with Martin Griffiths, the UN envoy to Yemen, to discuss the latest developments in the Yemen crisis.

The meeting comes particularly in light of the military escalation practiced by the Houthis, an Iranian-backed militia group, against the city of Marib.

A statement issued by the Arab League said that Aboul Gheit met Griffiths on Monday and listened to the latter’s vision and assessment of the current situation in Yemen.

Both sides agreed that the first step towards any political settlement was to achieve an immediate ceasefire across the country. This would work towards alleviating the serious humanitarian crisis suffered by the Yemeni people as a result of the ongoing conflict.

Aboul Gheit reiterated that the Houthis’ military operation against Marib could cause a major humanitarian crisis, which could also affect hundreds of thousands of Yemenis, especially with nearly one million refugees already in the city.

Serious international pressure must be exerted on the Houthis and the regional force that supports them, in order to set up an immediate and comprehensive ceasefire, he said.

Aboul Gheit stressed that the Arab League believes maintaining a unified, independent, and fully sovereign Yemen on its national soil is the primary starting point for any settlement of the military conflict in the country.

He refused to turn Yemen into a platform for attacks on Saudi Arabia, or that the country’s fate should depend on regional agendas that do not care for Yemen’s interests or the suffering of its people.