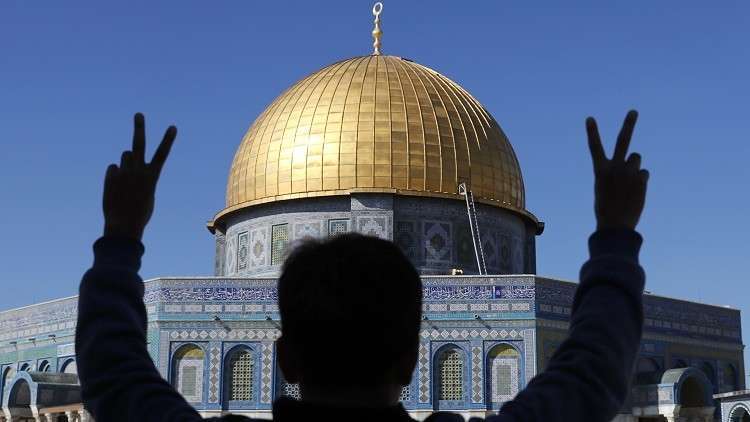 Egypt’s Minister of Foreign Affairs Sameh Shoukry has met with his Jordanian counterpart Ayman Safady to discuss the latest developments in Jerusalem, after the latest Israeli attacks on Palestinians in the city.

In a phone call on Sunday evening, the two ministers stressed the need for Israel to stop all attacks and provocative measures in order to end tension and restore calm.

Both Shoukry and Safady condemned the acts of violence and incitement carried out by extremist Jewish groups against Palestinians in the Old City of occupied East Jerusalem. They also demanded that Israel stop these actions immediately.

The two ministers stressed the need to oblige Israel to shoulder its responsibilities in accordance with international law and to provide protection to the Palestinians.

On Sunday evening, Israeli forces removed barricades from near the Al-Aqsa Mosque compound, after days of violent confrontations.

Tensions broke out in Jerusalem when Israeli police decided to prevent gatherings in the Bab Al-Amud Square, in the Damascus Gate area of East Jerusalem’s walled Old City, at the beginning of the holy month of Ramadan. The clashes reached a climax on Thursday, as 100 people were wounded in clashes with the Israeli police and Jewish groups.

A total of 50 Palestinian demonstrators were arrested by the Israeli police, while hundreds of extremist Israelis organised a march in central Jerusalem towards Damascus Gate, chanting “Death to the Arabs”.

The anger spread to the West Bank, which witnessed protests in solidarity with Jerusalem residents, whilst resistance factions in the Gaza Strip fired dozens of rockets at Israeli towns.

Meanwhile, Shoukry and Safady warned of the escalation of attacks and provocative actions against Jerusalem and impeding its Muslim residents’ access to the Al-Aqsa Mosque, which has escalated since the beginning of the holy month of Ramadan.

The two ministers stressed the need for Israel to stop these acts and violations that target the Arab, Islamic, and Christian identity of Jerusalem and its sanctities. They accused Israel of attempting to change the historical and legal status of the holy city.

They further demanded the international community to take effective action to break the deadlock in the peace process efforts and return to serious and effective negotiations to achieve a just and comprehensive peace based on the two-state solution in accordance with international legitimacy decisions and the Arab Peace Initiative.

Additionally, the discussion touched on the bilateral relations between the two countries and the latest updates regarding the dispute over the Grand Ethiopian Renaissance Dam (GERD).

For his part, Safady affirmed his country’s support of the Egyptian position in this issue.