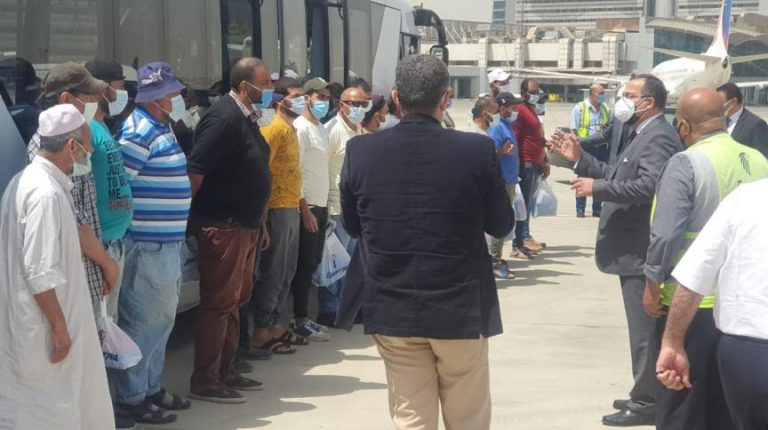 A plane carrying Egyptian fishermen detained in Eritrea arrived in Cairo, on Sunday, after their release by the Eritrean authorities.

Upon their arrival from Eritrea, the fishermen were received by Ambassador Amr Mahmoud Abbas, Assistant Minister of Foreign Affairs for Consular Affairs and Egyptians abroad, to check on their safety.

Abbas stated that Egypt’s Ministry of Foreign Affairs received help from the families of the detained fishermen, and had started to closely and continuously monitor developments related to the fishermen’s detention.

This was undertaken in coordination with the Egyptian Embassy in Eritrea’s capital, Asmara, and the Eritrean Embassy in Cairo. They sought to uncover the circumstances of the fishermen’s detention, to check on their safety, and to make all efforts to release them, by communicating with the Eritrean authorities.

Abbas added that the Ministry of Foreign Affairs undertook unremitting diplomatic efforts over the past few months working for the release of the detained fishermen.

He indicated that Egypt’s Minister of Foreign Affairs Sameh Shoukry was keen to continuously monitor the developments of the situation since the start of their detention. Shoukry also made a phone call to his Eritrean counterpart, Othman Saleh, in February.

The Minister affirmed Egypt’s interest in releasing the fishermen as soon as possible, and to follow up on their conditions and ensure their safety, good treatment, and care.

The Ministry of Foreign Affairs was keen to keep the House of Representatives and the Senate informed, and coordinate with them regarding all efforts made and developments related to the process of the fishermen’s release.

Earlier, Abbas received a delegation of representatives from the fishermen’s families from the governorates of Daqahleya, Port Said, and Damietta. The meeting ensured Abbas could keep them updated of the ministry’s efforts in this regard.