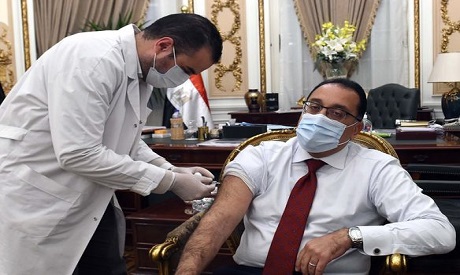 Egypt’s Prime Minister Mostafa Madbouly received, on Monday, the first dose of the two-shot vaccine against the novel coronavirus (COVID-19), as part of a nationwide vaccination drive, the Cabinet announced

This comes one day after President Abdel Fattah Al-Sisi received the first as part of the national campaign to vaccinate citizens against the virus in Egypt.

Madbouly urged citizens to speed up registration to receive the COVID-19 vaccine, in the interest of their health and the safety of society, amid a nationwide surge in infections.

He stressed that Al-Sisi has given the mandate to provide the necessary quantities of vaccines of all kinds, and to arrange the necessary funds for that.

Madbouly praised the vital role played by medical teams during this stage, in terms of treating infected coronavirus cases, and providing vaccinations to citizens at centres. He also praised these teams’ efforts to provide various services to Egyptian citizens across the country.

According to the latest figures released by the Ministry of Health and Population last week, a total of 660,000 Egyptians have been vaccinated, and more than 1.5 million people have registered since March for vaccination on the designated website. The country has received a total of 1.5 million doses of both the Chinese, as well as the AstraZeneca-Oxford University vaccines.

The ministry said that 567 patients were discharged after recovering from the virus, bringing the total number of recoveries to 167,024.

On Saturday, Minister of Health and Population Hala Zayed urged citizens to register for vaccination, saying many citizens and medical staff are reluctant to take the vaccine.

She said that the ongoing global third wave of the virus is seeing infections and deaths rise by 10% and 7%, respectively, compared to previous waves.