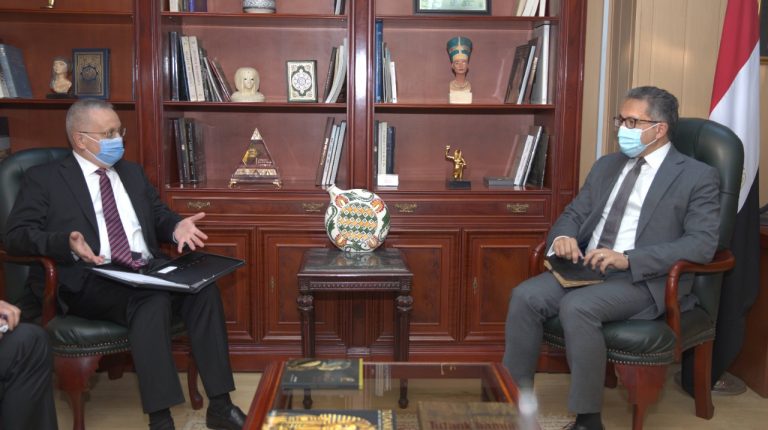 Egypt’s Minister of Tourism and Antiquities Khaled El-Anani received Russia’s Ambassador to Egypt Çyurchi Borisenko to discuss Egypt’s readiness to receive tourists from Russia and around the world.

El-Anani began the meeting emphasising the full readiness of Egypt and its tourist resorts to receive international tourism, and noted that tourist resorts in South Sinai and the Red Sea have seen a marked increase in arrivals in recent months.

This pick up in visitors has taken effect since the resumption of international inbound tourism in July 2020, as Egypt opened its borders again during the novel coronavirus (COVID-19) pandemic.

El-Anani said that this illustrates the confidence of tourism exporting countries in Egyptian tourist destinations. This has been driven by the safety of precautionary measures applied to tourist resorts, and the commitment of the country’s workers, to ensure a pleasant and safe stay for tourists.

For his part, Borisenko stressed the love Russian citizens have for Egypt and its ancient civilisation, and pointed out the importance of the Egyptian tourist destination for them. This is due to their association with Egypt since childhood, as Russian schoolchildren study Egyptian civilisation as part of their curriculum.

On Friday, Egypt and Russia agreed to resume all flights between the two countries, particularly to the Red Sea cities of Hurghada and Sharm El-Sheikh. The resumption was agreed upon during a phone call between Egypt’s President Abdel Fattah Al-Sisi and his Russian counterpart Vladimir Putin, according to a statement by the Egyptian Presidency.

Meanwhile, Russia’s Interfax news agency revealed that flights between Egypt and Russia could resume in the second half of May.

The resumption comes after a hiatus of over five years, as Russia imposed a travel ban on Egypt following the downing in Sinai of a Russian passenger plane, in late October 2015, in which all passengers were killed.

In January 2018, the Russian government gave permission for regular flights to resume only to Cairo International Airport after a two-year hiatus, with Russian flights from Moscow returning to Cairo in April.