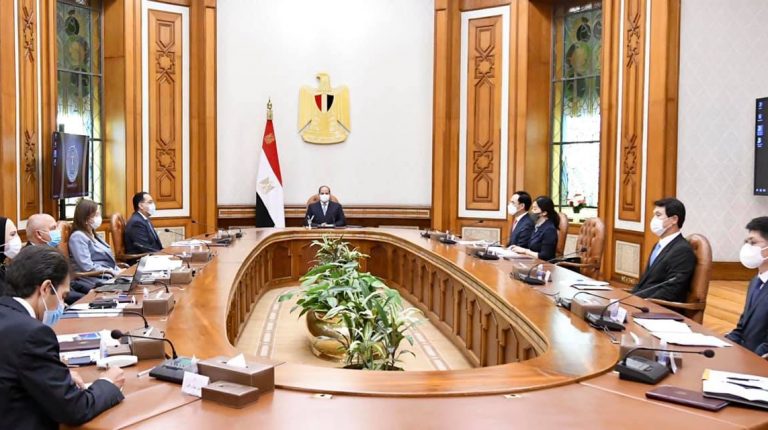 The meeting dealt with a review of the joint cooperation with Hyundai Rotem, which would include signalling and communication systems, and control and command equipment, according to a statement from the Egyptian Presidency spokesperson.

During the meeting, Al-Sisi emphasised South Korea’s role as an effective development partner to Egypt.

He added that Egypt is looking forward to establishing strategic cooperation with the Korean company in many industrial fields, especially in the heavy industries sector that depends on labour intensity and advanced technology.

Also present at the meeting were: Prime Minister Mostafa Madbouly; Minister of Planning and Economic Development Hala El-Said; Minister of Transportation Kamel El-Wazir; and Nevine Gamea, Minister of Trade and Industry; Mohamed Ahmed Morsi, Minister of State for Military Production; as well as Ambassador of the Republic of Korea to Egypt, Hong Jin-wook.

Al-Sisi stressed that the principle of localising industry and transferring technology to Egypt is one of the state’s priorities in cooperation with international partners. It also reflects a preferential factor in contracting for the implementation of industrial projects in Egypt.

He noted that Egypt possesses all the components of industry localisation and the transfer of advanced technology in the largest possible percentage of local components. It opens wide horizons for exporting the company’s products to countries in the region and Africa, given the strategic location of Egypt.

For his part, Lee reviewed the projects that Hyundai Rotem aspires to implement in Egypt during the comping stage, including the project to manufacture subway cars, signal systems, control and command equipment, and railway engineering works.

He also pointed out the company’s intention to benefit from the promising opportunities offered by the Egyptian economy through many current or future development projects related to the activity and experience of the company.

Lee also reviewed the opportunities for joint cooperation in the field of energy, especially green hydrogen production. This would exploit Egypt’s natural resources from new and renewable energy, and to use them, as clean energy, as fuel for trains.