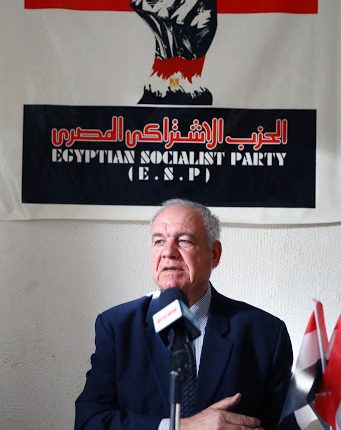 The Communist Party of China (CPC) is a model for the true embodiment of people’s aspirations, a renowned Egyptian politician told Xinhua in a recent interview.

“The CPC is a vigorous mass popular party that has managed to embody all the aspirations of its people and nation for prosperity and progress,” said Ahmed Bahaa El-Din Shaaban, secretary-general of the Egyptian Socialist Party (ESP).

Shaaban commended the achievements of the Chinese ruling party over the past 100 years that led to the rise of China from a poor country to the world’s second-largest economy, describing the accomplishment as a “miracle.”

“For the CPC to achieve this miracle in less than four decades, it is an unprecedented accomplishment in the history of humanity,” he said.

“In this century, the party has been exposed to problems, attacks, and tough situations, yet it managed to overcome them all and be connected to the people, achieving what no other party has ever achieved in history,” said the ESP chief.

Shaaban pointed out that he visited China three times and met Chinese President Xi Jinping twice, once during Xi’s visit to Egypt in 2016, and the other time during his visit to China in 2018.

He praised Xi, also general secretary of the CPC Central Committee, as “a true leader and a high-class statesman” as well as “a model for a leader who believes in his mission, in his cause, and in his people.”

The Egyptian party chief is currently writing a book on China’s development experience, and has recently written several articles on China, covering its success in eliminating extreme poverty and its successful battle against the COVID-19 crisis.

Under the CPC leadership, China has managed to overcome the ordeal, restore its economic activities and then extend a helping hand to the world with medical aid and expertise to fight the pandemic, according to the Egyptian politician.

“China’s CPC-led battle against COVID-19 is the greatest evidence of the party’s competence and preparedness to lead humanity to a desirable and positive shared destiny,” he said.

Shaaban also described the Egypt-China relations as “historical” and “strategic” that involve “great gains for both sides.”

Egypt can benefit from the Chinese experience in fighting poverty, achieving scientific and technological progress and carrying out infrastructure projects, and it can play a major role in building the Belt and Road as a pivotal country in Africa, the Arab world and the Middle East, according to the ESP chief.

The Egyptian politician emphasized that among the factors behind the CPC’s success are its closeness to the people and ability to gain their confidence through sincerity and fulfillment of promises, as well as its ability to cleanse itself via continuous anti-corruption campaigns.

“The CPC is a party with humanitarian values, which extends its hands to the whole world for common prosperity and seeks relations that achieve the common good of all humankind,” Shaaban said.