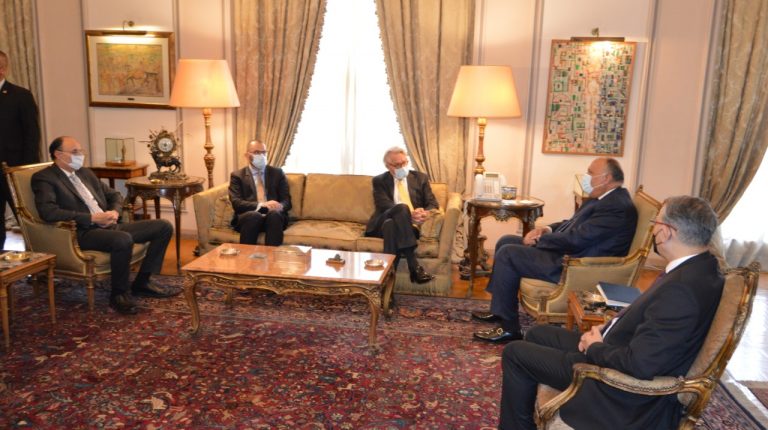 Ahmed Hafez, official spokesperson for Egypt’s Ministry of Foreign Affairs, said that during Shoukry’s meeting, the two sides exchanged visions on developments in the Palestinian issue.

They also discussed ways of advancing the peace process between the Palestinians and Israelis.

Shoukry reviewed the Egyptian vision in this regard, and Cairo’s efforts aimed at providing a favourable atmosphere for the resumption of dialogue. It is hoped that this will lead to the launch of a comprehensive negotiation track based on the references of international law, and relevant internationally legitimate decisions.

The minister touched on Egypt’s joint efforts with Jordan, France, and Germany as part of the Munich Formula, and its keenness to communicate between the Palestinians and Israelis. This aims to provide confidence-building measures to allow the launch of negotiations between the two sides.

Shoukry also reiterated Egypt’s concerns on the escalation of attacks in Jerusalem, and the need to stop violations that target the Arab, Islamic, and Christian identities of the city. These violations, he noted, affect Jerusalem’s sanctities, and attempt to change the existing historical and legal status.

He agreed with Wennesland on the importance of intensifying communications in the coming stage, to avoid any escalation in Jerusalem or the Gaza Strip.

For his part, Wennesland expressed his appreciation for Cairo’s efforts in pushing for resumed peace efforts and achieving Palestinian reconciliation. He also noted his aspiration for the continued pace of coordination and consultation with Egypt.

In a separate meeting with Aboul Gheit, the two sides discussed the recent developments in Jerusalem and Gaza, and the overall situation in Palestine and Israel. During the meeting, they also reviewed ways and opportunities to revive political talks between the two parties.

During the meeting, Aboul Gheit expressed concern about the recent escalation in Jerusalem, blaming the extreme right-wing rhetoric in Israel for the worsening events. He also pinned blame on the Israeli authorities who he said sought to impose new restrictions on the Palestinians in the Old City and Al-Aqsa Mosque.

Aboul Gheit pointed out that the coming days require wisdom and distance from provocation, especially since this time of year sees the influx of tens of thousands of worshippers to the Temple Mount.

He highlighted the right of Palestinians to reach the Al-Aqsa Mosque without obstacles or barriers, and warned against incitement by extremist Jewish groups in this regard.

Aboul Gheit’s meeting with Wennesland dealt with the situation in both Palestine and Israel, and the means and opportunities to revive a path for talks between the two parties. This would come in light of the political developments for the Israeli and the Palestinians.

He also stressed the importance of continuing international support for the Palestinian Authority in this difficult phase, especially with the serious economic and social consequences of the novel coronavirus (COVID-19) pandemic.

This support would also extend to support the Palestinians as they face economic deterioration due to the restrictions imposed by the occupation and restrictions on movement and economic activity.