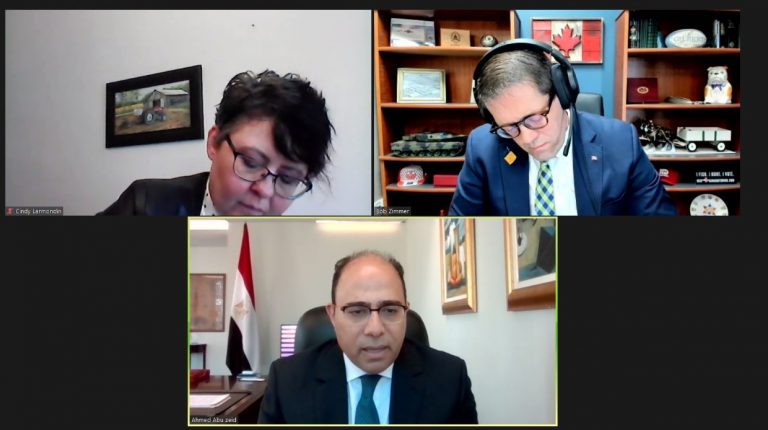 Egypt’s Ambassador to Canada Ahmed Abou Zeid is currently holding intensive meetings with representatives from Canada’s House of Commons and Senate to present Egypt’s vision on the Ethiopian dam crisis.

The discussions aim to inform the Canadian parliamentary members from all political parties of the fairness in Egypt’s position on the issue of Blue Nile dam.

Abou Zeid also aims to highlight the dangers of any unilateral measures taken by Ethiopia that would harm Egypt’s water security.

It also confirms Egypt’s continued adherence to the negotiating approach if the other party has the real will to reach a consensual solution.

The ambassador to Ottawa said that the meetings were held with: Sven Spengemann, Chairperson of the Foreign Relations Committee in Canada’s House of Commons; members of Canada’s two parliamentary chambers; as well as the Chairperson and members of the Canadian-Egyptian Friendship Group in Parliament.

The meetings also reflect a full understanding of the River Nile’s importance to Egypt, Abou Zeid said. It was an opportunity to outline the ambassador’s conviction of the need to abide by the provisions of international law related to international rivers.

The Canadian MPs also affirmed that their country applies these principles in its management of its shared water resources with the US.

The Canadian experience confirms that cooperation and the negotiating approach in order to achieve common interests and not harm the other is the right approach. It is an approach that must be followed away from taking unilateral measures aimed at imposing a fait accompli.

Abou Zeid added that he discussed several proposals and ideas with the Canadian MPs, aimed at activating the country’s role in supporting efforts towards a comprehensive and urgent agreement on the Ethiopian dam. This would ensure that the rules are defined for filling and operating the Grand Ethiopian Renaissance Dam (GERD).

He indicated that he was keen to explain the details of the tripartite negotiations over the past ten years, and the reasons for their stumbling as a result of the absence of the political will for a solution on the Ethiopian side.

Abou Zeid pointed out that the current stalemate poses a great danger to regional stability and the interests of its international partners, including Canada. This is particularly if Ethiopia decides to implement its declaration to start the second filling, regardless of the results of the negotiations.

Moreover, it was agreed to continue consultations and coordination between the Egyptian ambassador and members of the Canadian Parliament to follow the developments of the situation during the next stage.