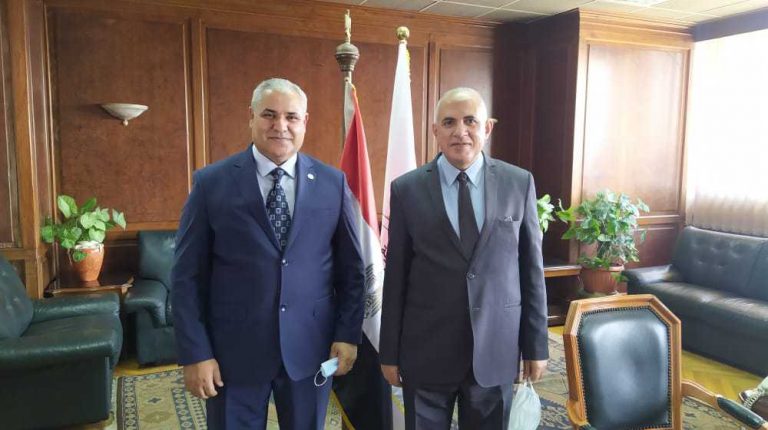 Egypt’s Minister of Water Resources and Irrigation Mohamed Abdel Aaty met, on Wednesday, with Abdel Hakim Ragab, Assistant Director-General and Regional Representative for the Near East and North Africa at the United Nations Food and Agriculture Organization (FAO).

The meeting addressed strengthening cooperation between the ministry and the FAO in the water sector.

Eman Sayed, Head of the Planning Sector at the Ministry of Water Resources and Irrigation, and Nasr El-Din Haj, FAO Representative in Egypt, were also present in the meeting.

During the meeting, Abdel Aaty stressed the important connection between water and food, as the former represents a key element in agriculture and achieving food security. He pointed to the importance of developing the water system, its role in improving the agricultural system, and bridging the food gap Egypt currently faces.

He said that his ministry is implementing many projects to upgrade Egypt’s various water systems, including the national project for the rehabilitation of canals, and the project to shift from flood irrigation to modern irrigation systems. It also covers the expansion in the use of smart irrigation applications.

Egypt suffers from water scarcity, which has meant implementing measures and policies aimed at preserving water and maximising the return from water units, Abdel Aaty said.

These measures include growing new varieties of crops that consume less water, and conserve groundwater to ensure its sustainability. This is in addition to work to provide additional water resources through projects to protect against the dangers of floods, which contribute to rainwater harvesting in the artificial lakes.

The Ministry of Water Resources and Irrigation has also taken several measures to protect the Nile Delta from the impacts of rising sea levels.

During the meeting, Abdel Aaty thanked Ragab for his organisation’s participation in the three editions of the Cairo Water Week, and briefed the FAO representative on his ministry’s latest projects.