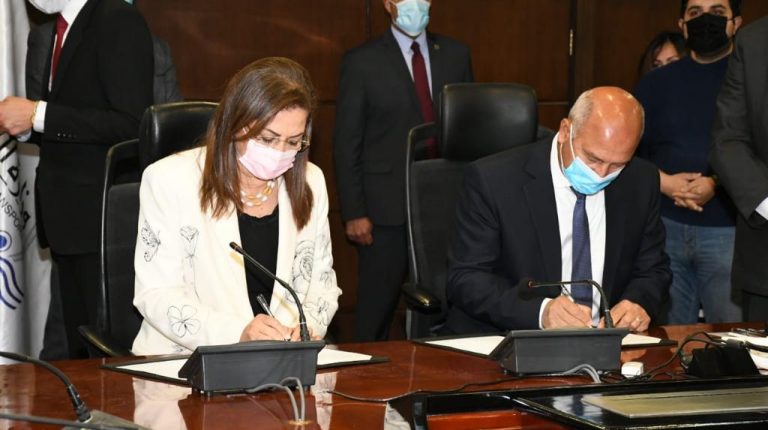 The MoU also covers the transfer of South Korean technology, and comes as a result of discussions between Egypt’s President Abdel Fattah Al-Sisi and Yong-Bae Lee, Chairperson and CEO of Hyundai Rotem.

The discussions were aimed at facilitating the cooperation between Hyundai Rotem and NERIC to help Egypt localise the railways industry.

El-Wazir confirmed that the signature comes as part of the Egyptian leadership’s directives to localise the manufacture of transportation units to a high quality.

This will also see Egypt provide new trains for the various metro lines over the next six years. The production will be undertaken in cooperation with Egyptian companies to settle this industry in the country.

“We are proud to start today the first real manufacturing steps for the moving units of the metro and the means of electric traction with a local manufacturing percentage,” El-Wazir said, “President Al-Sisi directed for the localisation rate in local industry to reach up to 25% within two years, and 50% of the localisation after four years, and then up to 75% over six years.”

The minister also said that the MoU’s signing represents a great leap in localising the railway industry in Egypt. This comes particularly with the volume of national projects that the state is implementing in the field of modernisation and development of transportation in the metro and electric traction, indicating that this cooperation.

“It ensures that mobile units are manufactured locally to secure Egypt’s requirements, and increase exports,” he added, “When the company begins manufacturing, the priority will be to export especially to Africa.”

In a related context, El-Wazir asserted that the contract between Hyundai and SEMAF to supply 32 new air-conditioned trains for the Cairo Metro’s Line 3 includes the local manufacture of 25% of the 10 trains.

For her part, El-Said said that the MoU’s signing is a serious step for the development of the Egyptian industry. It also helps direct the implementation of the structural reforms programme announced by the Egyptian government this week.

The minister also said the MoU boosts the local transportation manufacturing industry, in a way that is related to the transfer of advanced technology. This transfer will be conducted with the best global partners in this labour-intensive and technology-intensive industry, which will also create more job opportunities.

She added that the cooperation between Hyundai Rotem and NERIC represents a very important alliance that includes a number of representatives from the Egyptian Government.  This includes representatives from The Sovereign Fund of Egypt (TSFE), the Suez Canal Economic Zone (SCZone), alongside a coalition from Egyptian companies.

El-Said pointed out that the Egyptian Government launched the National Program for Structural Reforms, which focuses on deepening and localising industry and preparing the environment for the private sector.

The meeting tackled the localisation of train manufacturing, as well as signalling, communications, control, and driving systems.

Al-Sisi affirmed that South Korea is a development partner and that the government looks forward to establishing a strategic partnership with the company in many industrial sectors, particularly heavy industries that are labour-intensive but still use advanced technology.

The President reiterated that “the localisation of industries and technology transfer is a priority to Egypt in international partnerships and that they constitute a preferential factor when making deals”, a statement by the Egyptian Presidency read.

He highlighted that the country currently possesses all means to allow increasing the local component in any product, and that it is a good base to export to Africa and other states in the region.