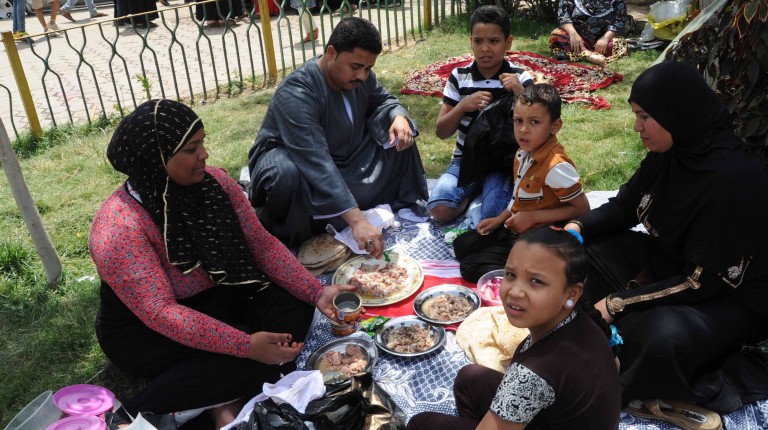 Egyptians celebrated ‘Sham El-Nessim’, on Monday, one of the world’s oldest folk festivals which traditionally falls close to the Coptic Orthodox Easter celebrations.

Sham El-Nessim, which literally translates as “smelling the breeze”, is a Pharaonic celebration of the spring season in Egypt. The celebration, which takes place one day after Easter Sunday each year, dates back to Ancient Egyptian times, to at least 2700 BCE during the era of the Third Dynasty of the Old Kingdom.

The Ancient Egyptians, who called it the Feast of Shmo (“the revival of life”), determined the exact date each year by measuring the sun’s alignment with the Great Pyramid in Giza.

Due to the pleasant weather at this time of year, the holiday is often celebrated by families with a trip to the park.

The dish most closely associated with Sham El-Nessim is a salted and fermented mullet fish called feseekh, which is traditionally eaten with spring onions.

The habit of eating onions on the feast day is equally ancient. According to Egyptian legend, one of the pharaoh’s daughters had an incurable disease. Doctors were baffled for a cure, until a high priest gave the princess onion juice by way of medicine.

Her condition improved and her father, pleased at her recovery, declared the day an official celebration in honour of onions. From that day forward, people would roam the city of Menf each year offering onions to their dead.

During Sham El-Nessim, it is customary for people to colour eggs, a tradition that reflects the Ancient Egyptian view of eggs as symbolic of new life. They chose eggs as a symbol of life, because God can create life from the inanimate such as creating chicks from eggs.

Apart from the painting and decorating of eggs, another custom is to write wishes on eggs and then hang them in baskets from trees and houses, in the hope that God would answer the wishes.

Before dawn, Ancient Egyptians used to head to gardens or the banks of the River Nile to watch the sun rise, bringing with them food and flowers. They would then spend the day in the open air, welcoming the spring with joyful singing.