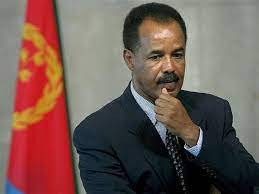 Eritrea’s President Isaias Afwerki arrived in the Sudanese capital Khartoum, on Tuesday, for two-day talks amid tensions over a long-time border dispute between Sudan and Ethiopia.

Afwerki was received by Abdel Fattah Al-Burhan, head of the Sudanese Sovereignty Council. The two leaders discussed cooperation and ways to develop ties between the two countries, according to a statement from the Sudanese sovereign council.

Observers believe that the visit comes in light of Asmara’s fear of the potential great dangers, should tensions between Ethiopia and Sudan further worsen over the border crisis around Sudan’s Fashaqa region, which erupted last November.

In February, Sudan had previously accused a third party of siding with Ethiopia in the border dispute between the two countries.

Eritrea sent its Minister of Foreign Affairs to Sudan who gave assurances during his talks with Sudanese officials that Eritrea was not part of the dispute between Sudan and Ethiopia.

Eritrea has been accused of fuelling the crisis and holding a bias towards the Ethiopian side, either through the direct support it provided to Amhara groups, or by igniting the internal situation in Ethiopia’s northern Tigray region. This has increased the flow of Ethiopian refugees into Sudanese territory.

Sudan and Ethiopia have since held rounds of talks in an attempt to settle the dispute, most recently in Khartoum in December. These talks have, however, not made progress.

Khartoum has said its forces have reclaimed most of its territory. It has called on Ethiopia to withdraw troops from at least two points it says are inside Sudan, under an agreement that demarcated the borders between the two nations in the early 1900s.