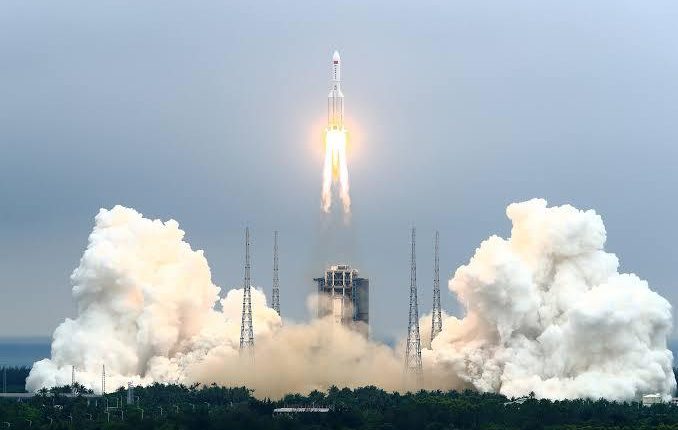 A large out of control Chinese rocket is likely to re-enter the earth’s atmosphere on 9 May, according to Gad Al-Qadi, President of Egypt’s National Institute for Astronomical and Geophysical Research.

Speaking on Wednesday, Al-Qadi added that the rocket’s exact entry point into the earth’s atmosphere cannot be pinpointed until within hours of the expected re-entry.

Susan Samuel, Associate Professor at the National Institute for Astronomical Research’s Department of Sun and Space Research, said that China launched its first module for the Tianhe space station on 28 April.

She confirmed the 30-metre high core of the Long March 5B rocket launched the “Heavenly Harmony” unmanned core module into a low Earth orbit from Wenchang in China’s Hainan province.

The Long March 5B rocket entered a temporary orbit, setting the stage for one of the largest ever uncontrolled re-entries. Some experts fear the 22.5 tonne rocket could land on an inhabited area.

On Tuesday, the core was said to be orbiting earth about every 90 minutes, at a speed of about 27,600km/h and an altitude of over 300km.

Based on its current orbit the rocket is passing over earth as far north as New York, Madrid, and Beijing, and as far south as southern Chile and Wellington, New Zealand, and could make its re-entry at any point within this area.

A source working for China’s manned space programme said most of the debris would probably burn up while entering the atmosphere, as all that remained was little more than an empty shell.

Jonathan McDowell, Astrophysicist at the Astrophysics Center at Harvard University, said that it is impossible to predict where it will land when earth’s atmosphere eventually drags it down. However, the most likely outcome is that it will fall into the sea, as the ocean covers about 71% of the planet.