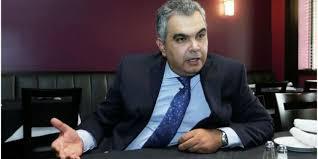 The ambassador’s comments came during his participation in a seminar at the American National War College, in the presence of a number of students, leaders, and staff of the college.

Zahran discussed the special strategic importance of Egyptian-US relations, and Egypt’s role in establishing stability and security in the Middle East and Africa (MEA) region.

He highlighted the various challenges facing the region, which require coordination among the international community to ensure their successful resolution.

The issue of the Grand Ethiopian Renaissance Dam (GERD) came as one of the most prominent topics dealt with by Zahran. He noted that Egypt will not be able in any way to be complacent with regard to its water security.

The ambassador warned that the unilateral management of the filling and operation of the controversial Ethiopian Dam could result in the exacerbation of water poverty in Egypt.

It may also increase the negative effects of climate change, which will be difficult to contain, and may also cause huge environmental, social, and economic damage that Egypt cannot allow to happen.

Zahran said that the issue of River Nile waters for both Egypt and Sudan is more dangerous than being left captive to the internal situation in Ethiopia. This is due to the grave consequences related to its waters for the peoples of the region.

The ambassador also said that it was the successive Ethiopian administrations that have deliberately pursued policies based on fuelling public opinion in the country regarding issues of River Nile water and internal trade.

This was in an attempt to contain the chronic internal tensions in Ethiopia, instead of seeking to reach a compromise solution that secures the common interest of the peoples of the region.

He highlighted that there was a solution on the negotiating table in Washington last year that would allow for electricity to be generated as efficiently as possible from the GERD.

It would also guarantee Ethiopia’s right to establish future projects under the umbrella of international law.

The Ethiopian side absented itself, at the last minute, from the meeting devoted to signing the agreement. This is given its preference for unilateral action without being bound by international law, and without any prior coordination or consultation regarding dam projects.

This is the systematic policy pursued by Ethiopia with its various neighbours, which has UNESCO to place Lake Turkana in Kenya on the verge of extinction, and also severely affects the inhabitants along the Juba and Shebelle Rivers in Somalia.

Zahran stressed that Egypt cannot allow the repetition of such unilateral Ethiopian practices in the Nile Basin as well, and that this is an existential and fateful issue for the Egyptian people.

He called for the US’ support for the current mediation process under the leadership of the African Union’s (AU) current president, the Democratic Republic of the Congo’s President Felix Tshisekedi.

This would encourage a binding agreement on the rules for filling and operating the GERD as soon as possible.

This could also protect security and stability in the region, and support the US strategic interests with the three countries involved in GERD negotiations, Egypt, Sudan, and Ethiopia.