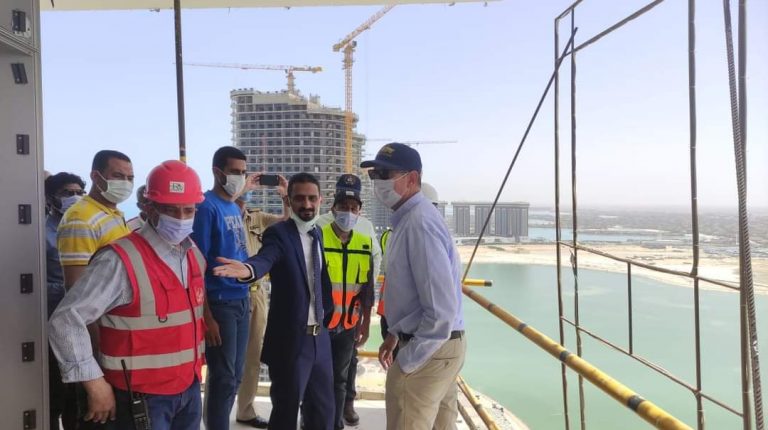 During the tour, the German representatives also sought to talk about investment opportunities in the city.

The tour began with an inspection of beach towers. Nunn visited one of the towers.

The ambassador also inspected one of the housing units that had been finished and furnished as a model, alongside an inspection of the recreational area, Latin neighbourhood, and the Heritage City.

Nunn expressed his great admiration of the city, and the speed and accuracy of implementation. He emphasised the increase in cooperation frameworks between Egypt and Germany and the strength of relations between them. This is especially in the transport sector, namely the express electric train, for which the first phase of the Alamein/Ain Sokhna line will be implemented.

Wael Samir, Head of the New Alamein City Authority, said that finishing on the external facades and interiors are being carried out in 15 towers in the first phase of the beach towers area. This is taking place alongside construction on a number of other towers in the area.

Samir added that a recreational area is located in the middle of the beach towers area, directly overlooking the sea, and is comprised of a 3,000-car capacity garage, as well as a number of shops. Additionally, afforestation and planting works are underway in the recreational area.

He said that the Heritage City project is built on an area of ​​260 feddan, and the total number of establishments in the city is about 70 facilities. This includes a main lake, central park, mosque, church, Roman theatre, opera, as well as commercial and hotel buildings and in the old neighbourhood, and a cinemas complex.

Engineering Solutions aims to contract projects worth EGP 2bn in 2021