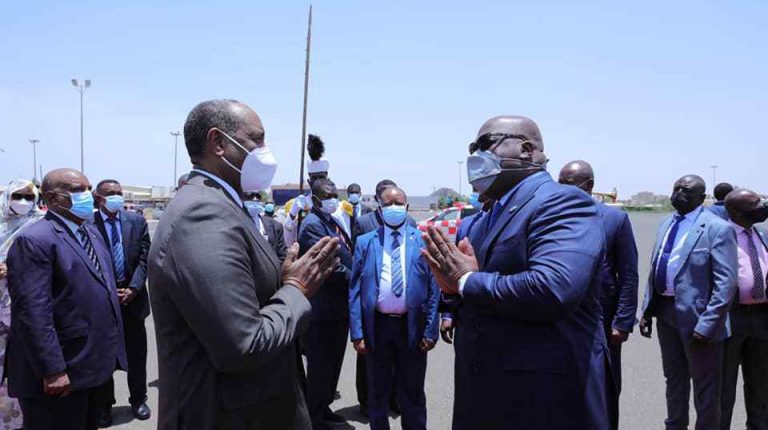 Egypt’s President Abdel Fattah Al-Sisi received, on Saturday evening, his counterpart of the Democratic Republic of Congo (DRC), Felix Tshisekedi, in Cairo. The visit comes as part of an African tour conducted by Tshisekedi, who is also current President of the African Union (AU), which includes Sudan and Ethiopia.

Tshisekedi arrived in Cairo after concluding several meetings with Sudanese officials in Khartoum, where they discussed the developments of the Ethiopian dam talks and border conflicts between Ethiopia and Sudan.

Al-Sisi will discuss with Tshisekedi possible methods to reach a legally binding agreement on the Ethiopian dam, according to Bassam Rady, the official spokesperson for the Egyptian Presidency.

Tshisekedi visited Khartoum on Saturday morning. He was received by President of the Sovereignty Council, Abdel Fattah Al-Burhan.

Also present were a number of ministers and state officials, members of the DRC’s diplomatic corps, and the community in Khartoum. The visit lasted for only a few hours, as he met with Al-Burhan and Sudan’s Prime Minister Abdalla Hamdouk.

During the visit, Tshisekedi held joint talks with a Sudanese delegation, headed by Al-Burhan.

The session discussed bilateral relations between the two countries and ways to develop them, in addition to reviewing international issues, and regional developments of common interest.

Earlier, Al-Burhan has met with US Special Envoy to the Horn of African, Jeffrey Feltman, who said that an agreement must be reached between the three countries (Egypt, Sudan, and Ethiopia) on the Grand Ethiopian Renaissance Dam (GERD), Al-Arabiya TV reported.

He added that it is necessary for his country to coordinate with Ethiopia, to maintain international peace. He noted that his country’s forces did not violate the borders of Ethiopia through its recent deployment at the borders between the two countries.

He also said that the recent deployment of Sudanese Armed Forces personnel “took place within the Sudanese borders approved by Ethiopia on a number of occasions and identified by historical agreements, leaving only the placing of border markers between the two countries”.

Al-Burhan expressed his country’s readiness to cooperate with Ethiopia in resolving its internal issues based on good-neighbourly relations between the two countries.

The statement added that the proof presented to Feltman offered a general explanation of the GERD file. It also outlined Sudan’s firm position in support of a negotiated solution to the existing differences between it and Egypt on one hand, and Ethiopia on the other.

Al-Burhan stressed the need to reach an agreement between the three countries involved in GERD negotiations, namely Egypt, Sudan, and Ethiopia, on the issues of filling and operating the dam.

Al-Burhan praised the current advanced level of relations between Khartoum and Washington, and noted the need for cooperation and coordination between the two sides to maintain international peace and security.

In turn, Feltman noted “the importance of Sudan, the Horn of Africa, and the security of the Red Sea to the US”, and asked Khartoum to “stand with him to accomplish his mission.”

Earlier this week, Egypt’s Minister of Foreign Affairs Sameh Shoukry and Minister of Water Resources and Irrigation Mohamed Abdel Atty held a meeting with Feltman and his accompanying delegation.

During the meeting, the two sides discussed developments in the Ethiopian Dam negotiations over the past week. They also consulted on ways to succeed in the ongoing efforts to reach a fair, balanced, and legally binding agreement on filling and operating the controversial dam.