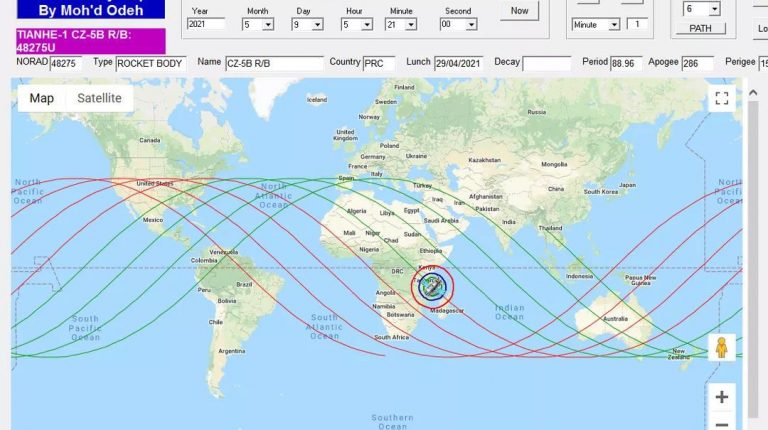 The European Space Agency (ESA) has predicted a “risk zone” in which the large Chinese rocket, which has run out of control, would likely crash into.

That area is “any portion of Earth’s surface between about 41.5 degrees north and 41.5 degrees south latitude”. The area includes virtually all of the Americas south of New York, all of Africa including Egypt and Sudan, parts of Asia south of Japan, as well as Spain, Portugal, Italy, and Greece in Europe.

That enormous range is, in part, a result of the rocket’s huge speed, with even slight changes in circumstance able to drastically change its trajectory. But its exact entry point into the Earth’s atmosphere will be pinpointed within hours of re-entry.

Meanwhile, the UAE’s International Astronomy Center said that the Chinese rocket will pass four times over the Arab world over the course of Saturday night.

The first time will take place at 18:30 GMT over the Arabian Gulf, whilst the second time will occur at 20:03 GMT over Egypt, Lebanon, Syria, Jordan and Palestine. Meanwhile, the third and fourth times will take place at 21:30 and 23:00 GMT, respectively, when the rocket will pass over North Africa.

The UAE has asserted that those countries will not be in danger, as it is unlikely that debris will fall.

The Long March 5B rocket, which is around 100 feet tall and weighs 22 tonnes, is expected to re-enter Earth’s atmosphere on 8 May.

On 29 April, the rocket launched a piece of the new Chinese space station into orbit, but was left to hurtle through space uncontrolled until Earth’s gravity began pulling it back to the ground.

Most of the vehicle is expected to burn up when it makes its final plunge through the Earth’s atmosphere. There is, however, always the possibility that metals with high melting points, and other resistant materials, could survive the trip.

Experts had given assurances that the chances of anyone actually being hit by a piece of space junk are very small. This is not least because so much of the Earth’s surface is covered by ocean, and because those areas that are land include huge swathes of uninhabited areas.