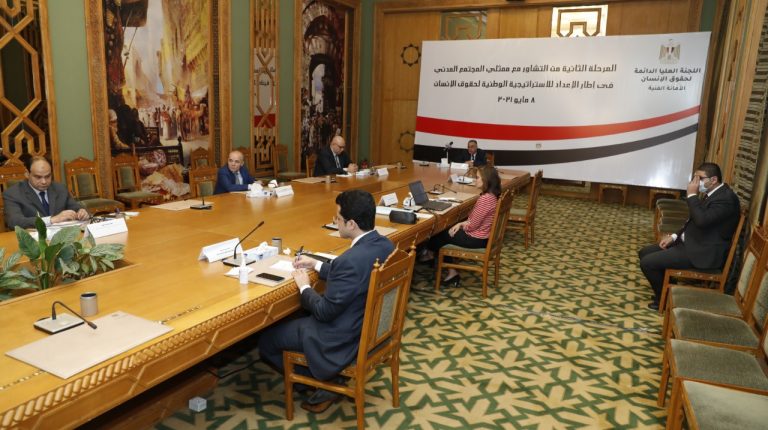 The hearings aim to maintain communication channels between the state and civil society and human rights organisations. This comes in preparation for the launch of Egypt’s first national strategy for human rights. It was attended by Permanent Representative of Egypt to the United Nations Office at Geneva Ambassador Ahmed Ihab Gamal El-Din and the head of SSCHR Technical Secretariat and Assistant Minister of Foreign Affairs Alaa Roshdy.

The first phase of hearings took place in December 2020 and January 2021.

Roshdy explained that the strategy adopts a comprehensive approach to promoting basic rights and freedoms, which is characterized by a clear vision and strategic direction in planning.

He explained that the Egyptian long-term National Human Rights Strategy is an important tool for self-development in this field.

Roshdy revealed that the time frame for its implementation extends for five years (from mid-2021 to mid-2026) and that it includes four main pillars, namely: civil and political rights; economic, social and cultural rights; human rights for women, children, and persons with disabilities youth and the elderly; education and capacity building in the field of human rights.

Egypt’s Supreme Standing Committee for Human Rights, which is comprised of 12 ministries and national bodies, was established under the directives of Prime Minister Mostafa Madbouly, and is chaired by Minister of Foreign Affairs Sameh Shoukry.

The advisory body was set up by the Supreme Committee, and is comprised of 25 Egyptian public figures and experts in the fields of law, politics, and economics. It will contribute to the process of preparing the strategy.