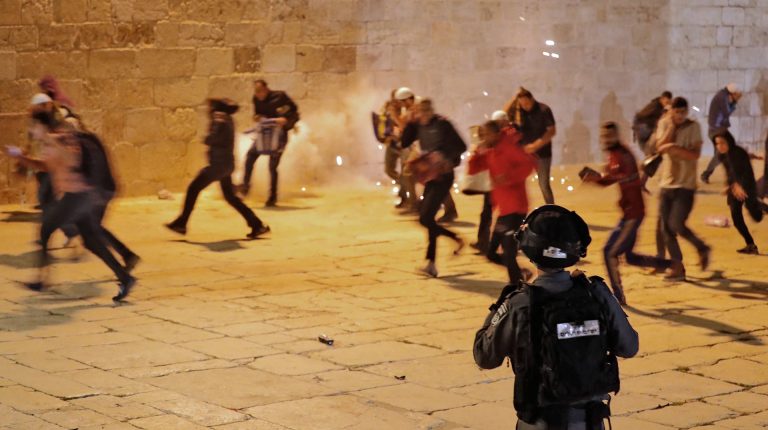 Egypt’s parliament condemned the Israeli violence in Jerusalem, on Sunday, describing it as a new catastrophe in which the occupation is violating the rights of Palestinian people.

Tensions have been rising over the potential eviction of Palestinians from land claimed by Israeli settlers in the Sheikh Jarrah neighbourhood of the city.

Egypt’s Parliament noted that the displacement of Palestinian families from their homes in Sheikh Jarrah is “a full-fledged crime of ethnic cleansing, in clear violation of all international covenants and resolutions of international legitimacy.”

It also affirmed that the Palestine cause is “the responsibility of all Arabs … We have to realise with certainty that there will be no viable Palestinian state without Jerusalem.”

It called on the international community, led by the United Nations (UN), to take urgent action to stop these attacks and provocations that can lead to serious consequences.

A spokesman for the Palestinian Red Crescent told the AFP news agency that 90 people had been wounded in the violence that saw stun grenades and rubber bullets fired to disperse the crowds. The aid service had given an earlier estimate of 53 people who had been injured in the violence.

The clashes took place outside Jerusalem’s Old City during what was believed to be the holiest night of Ramadan.

Israeli police had cordoned off areas of the Old City to prevent gatherings, and cracked down on protesters in a show of force that threatened to deepen the holy city’s worst religious unrest in several years. The police defended their actions, calling them security moves, although Muslims see them as provocations.

The Arab League will hold an extraordinary session at the level of permanent delegates in attendance in Cairo, on Monday, at the request of Palestine.

The meeting will be chaired by Qatar, the current president of the Arab League.

Hossam Zaki, Assistant Secretary-General of the Arab League, said the meeting will discuss Israeli crimes and attacks against Islamic and Christian holy sites in occupied Jerusalem, especially the Al-Aqsa Mosque, and attacks on worshipers.

Zaki added that the meeting will also deal with Israeli plans to seize the homes of Jerusalem residents, especially in the Sheikh Jarrah neighbourhood. He said that this was an attempt to empty the holy city of its residents, and displace its people.

Palestine’s Ambassador in Cairo Diab Al-Louh said that the meeting must produce decisions and practical measures that rise to the level of this unprecedented catastrophic event. It should also deliver a unified Arab message from the Arab League.

Pope Francis also called for an end to the clashes. “Violence only generates violence. Let’s stop these clashes,” he said. “I pray so that this might (Jerusalem) be a place of encounter and not violent clashes, a place of prayer and of peace.”

Jordan warned Israel on Sunday to stop what it described as “barbaric” attacks on worshippers in the Jerusalem Aqsa mosque and said it would be stepping up international pressure.

The kingdom, which has custodianship of Moslem and Christian sites in Jerusalem, said Israel — which has clashed with thousands of Palestinians in recent days — should respect worshippers and international law safeguarding Arab rights in the disputed city.

“Israel is acting responsibly to ensure respect for law and order in Jerusalem while allowing freedom of worship,” he said.

The four members of the Middle East Quartet — the US, Russia, the EU, and the UN — expressed “deep concern” over the recent unrest. They pointed to “last night’s confrontations (Friday) between Palestinians and Israeli security forces at Haram Al-Sharif/Temple Mount.”

“We are alarmed by the provocative statements made by some political groups, as well as the launching of rockets and the resumption of incendiary balloons from Gaza towards Israel, and attacks on Palestinian farmland in the West Bank.”