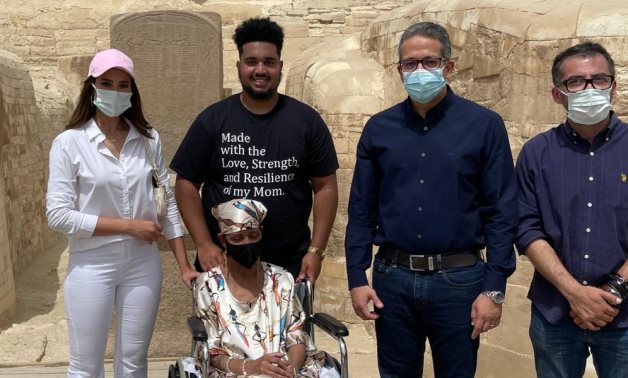 The once-in-a-lifetime trip comes after Gloria Vitale’s son, Dustin, raised money to take her on her dream trip to Egypt, following her diagnosis with terminal cancer.

Later on Sunday, Gloria visited the Giza Pyramids, in the presence of Minister of Tourism and Antiquities Khaled El-Anani and members of the CPYP.

Two CPYP members, Nariman Khaled and Hazem Hilal, accompanied Gloria and the Minister on a tour of the Giza Pyramids and the Sphinx, which was followed by the family watching the Sound and Light Show at the historic site.

After Gloria and her family arrived at Cairo International Airport, CPYP members Pilot Muhammad Al-Saidi and Professor Sherine Mamdouh received the family, and accompanied them to their hotel.

Gloria expressed her happiness that her dream of visiting Egypt has finally come true, and said she was excited about visiting the pyramids on Sunday. Dustin said he was happy with the CPYP’s welcome, and that his mother’s wish could be fulfilled.

The CPYP set up a tourism programme for Gloria and her family, starting in Cairo and ending in Sharm El-Sheikh in South Sinai. Members of the committee are set to accompany her on her trip to facilitate her stay.

Egypt to extend domestic tourism initiative to 31 May