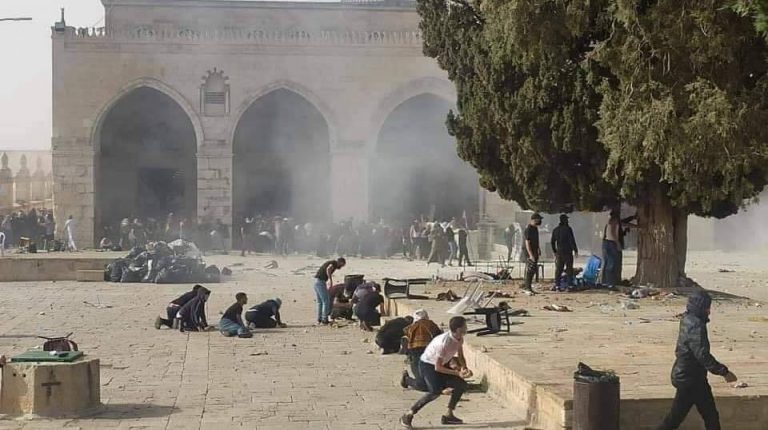 Egypt has strongly condemned a renewed storming of the Al-Aqsa Mosque compound by Israeli occupation forces, and the attack on Muslim worshipers who were forcibly evacuated from the mosque.

In a statement on Monday, Egypt’s Ministry of Foreign Affairs stressed the need for Israel to assume its responsibility regarding these rapid and dangerous developments, which predicts further tension and escalation.

On Monday morning, more than 300 Palestinian worshipers at the Al-Aqsa Mosque were wounded by rubber bullets, and dozens were also suffocated by tear gas. This followed the storming of the mosque by Israeli occupation forces.

“All practices that violate the sanctity of the Al-Aqsa Mosque should be stopped, especially in the holy month of Ramadan, in line with the rules of international law and in order to provide all aspects of protection for Palestinian civilians in the compound of the Al-Aqsa Mosque and the rest of East Jerusalem,” the Egyptian statement read.

Cairo also stressed the need to refrain from targeting the Arab, Islamic, and Christian identities that are housed in Jerusalem, as well as the targeting of the city’s holy sites.

Meanwhile, Sheikh Ahmed Al-Tayyeb, Grand Imam of Egypt’s Al-Azhar Al-Sharif, has criticised the world’s “disgraceful silence towards the callous Zionist terrorism, and the violations committed against Al Aqsa Mosque and our brothers in Palestine.”

He said, “Palestine will forever remain steadfast, and its people will continue their struggle to defend their land, honour and the Al Aqsa Mosque, the first Qibla, and third holiest site in Islam.”

The storming of the Al-Aqsa Mosque coincides with the attacks on thousands of settlers to the Old City of Jerusalem from the Damascus Gate side amidst severe tension. Settlers intend to carry out a settlement march in memory of the so-called “annexation of Jerusalem”.

The settlers’ actions came on the occasion of what they call the Day of the Unification of Jerusalem, in reference to the Israeli occupation of East Jerusalem in 1967.

Moreover, the occupation forces fired a barrage of tear gas, as well as sound and rubber bullets at the Al-Qibli Mosque, the Dome of the Rock and the Marwani Mosque. They also surrounded the retreat inside the Al-Qibli Mosque, where the confrontations focused. Local Palestinian media said that the occupation soldiers stormed the Bab Al-Rahma chapel.

For its part, the Palestinian Red Crescent announced that 305 Palestinians were injured, on Monday, in the clashes at the Al-Aqsa Mosque and the vicinity of the Old City of Jerusalem, including seven people in critical condition. A number of paramedics were injured during the Israeli aggression on the mosque.

In a statement on Monday morning, the Israeli police announced that after assessing the situation in the Al-Aqsa compound, they decided not to allow Israeli settlers to reach the mosque. However, settlers had already started to storm the area.

Israel’s Supreme Court in Jerusalem postponed its session that was scheduled for Monday, to pronounce the ruling in the case of evacuating Palestinian families from their homes in the Sheikh Jarrah neighbourhood of occupied Jerusalem. The court announced that it would return to consider the case within a month.

About 22 Palestinians were injured after Israeli forces attacked a march against the possible eviction of Palestinian families from the neighbourhood, the Palestinian emergency services said on Thursday.

Tensions began on Thursday when Israeli forces attempted to evacuate 28 homes inhabited by about 500 Palestinians, who have lived in the neighbourhood since the 1950s. The Israeli settlers claim to have bought the lands legally from two Jewish associations that bought it more than 100 years ago.